We spent the day at Cedar Point Friday, because the clock is now ticking on our CP time, and Simon was getting desperate to ride a roller coaster. Yeah, he's totally my kid.

I've learned over the years that you shouldn't skip on visiting the park because there's a chance of rain. When you have a season pass, it's not like you need to power ride everything in the park, so it's better to just chance it and enjoy whatever time you can. We're also into that Florida-like weather, where it's hot and humid, and thunderstorms are just part of doing business everyday. For that reason, we figured we'd give it a shot and see what happens.

We rolled in around 1:30 or so, and got rides in on Skyride and the midway carousel pretty quickly. From there, we headed to Raptor to do a parent swap. Diana got on, and it might have been her first lap since before she was pregnant (2009). The line wasn't long, so Diana got on after maybe five or six trains. In that time, it went from sunny, to a few drops with threatening clouds. I went up to the platform for my ride, and we had a double problem. They were taking a train off, and they had to sanitize one because some kid did something to bleed all over it. The lightning was visibly getting close, and they were shutting down. No ride for me!

We holed up in Donut Time, where I heard their new treatment for severe weather. A very dramatic electronic sound is made over the PA, and even over speakers in the donut shop. Then they announce the weather condition and encourage people to get inside. It was getting windy, but I figured I'd jet across the midway to get the platinum pass deal for fries, which is basically to get an extra fry and two drinks along with a chili-cheese fry. I wanted both of the fries plain, and given the usual incompetence in food service at the park (seriously, it just keeps sucking while other areas improve), the dude brought me fries with the mystery meat. It took five minutes to get them replaced.

The weather announcement repeated, and with the fantastic new speakers on the main midway, it just boomed in perfect clarity. It was really something to behold. There are a few areas in the park that still need new speakers, but this was impressive. The rain started to come down, and I managed to get a little wet by the time me and my family snacks got back to Donut Time.

After the storm, we managed to get all the way back to Lusty Lil's to see the show there, where Simon is now known as one of their biggest fans. Diana went to school with a professor of three of the performers, so she got a photo of them. Good times. Later, we went on Jr. Gemini, and Simon did his first lap on Woodstock Express with Diana. He didn't hate it.

The sun kept peeking in and out, and we had dinner at Famous Dave's. Once back in the park, we made our way to Giant Wheel. We got in the queue when we noticed the sky was looking threatening again. I was surprised they were still loading. We bailed on the queue with the intention of going to one of the other shows after a quick carousel ride. The booming announcements happened again, and we started to head toward the Centennial Theater. Half-way, it didn't look like they were letting people in, and I wasn't sure if they did their last show or it was full. We turned around and started to hustle toward the main arcade in the Coliseum building. People were hauling ass toward the parking lot, and it was like swimming upstream. The approaching storm was like a ribbon of black behind Top Thrill Dragster.

I tossed Simon up on my shoulders so we could move faster. I started to job, and Simon thought it was totally hilarious. And it was, until he put his hands over my eyes! Good times. We made it inside just before the downpour began, and headed to the back of the building, where we chatted with a couple of seasonals. Really friendly guys, good people. Many of the nearby crews took shelter there.

The radar indicated this was not going to pass quickly, so we decided we would just have to get a little wet. We took the back midway to the beach gate, and went in the eastern most doors of Breakers, and crossed all the way to the western most. From there, Simon splashed in every puddle he could find to our car, which was in the Soak City lot. It was quite an adventure!

First, I'm glad that Simon is not bothered by big storms. That's a plus. But he also, for the most part, takes all of the chaos and water in stride when we're stuck out in it. I was not that OK with it at his age. I love that we can have a day like this and it's still fun. 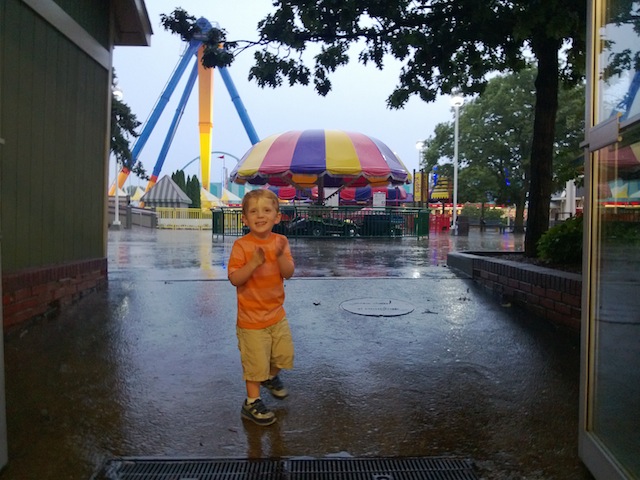