It was just two and a half months ago that I made good on finally getting a tattoo, and as I said then, it was really just half of what I wanted to do. I'm not getting any younger, and I am a grownup, so why wait?

The idea here actually evolved quite a bit over the last 10 years. We were still in Seattle, and I saw a woman in one of the Microsoft cafeterias that had this amazing shoulder piece that was kind of like a steampunk watch mechanism, photo-realistic and in full color, and I had never seen anything that detailed before. As I said, that's when I really got the bug, but then time got away from me, what with the parenting and moving and jobs and pandemic and stuff.

But the ideas would come to mind again, and over that much time, they changed a lot. Inspired by what I had seen in Redmond, I thought about some kind of clock face with gears and a sun and moon revolving around it, which evolved into a compass device. After that, bits of realism came and went, and it got more symmetrical. Over time, I started to really like the clean line work I would see on the Internet, but rarely in person. The gears, and the detail they would involve, started to fall by the wayside when I started to see more geometric stuff happening that was also detailed. Mandalas had a ton of detail if they were drawn that way, and that really appealed to me. Meanwhile, with all of the cruising and general desire to be near the ocean, the nautical vibes from a compass rose really stuck. It occurred to me that the two things, in the right hands, could skillfully be combined and layered. These were two things that I've seen separately quite a bit, but even for reference, I couldn't find many examples on people.

Of course I went back to Scott "Cool-Aid" Irwin at Hart & Huntington, and if you follow him on the Instagram, you can see that he can do pretty much anything. Last time, I was also super impressed with his ability to see how things best fit on different body parts, his knowledge of needle sizes and machines, how the ink pigments have improved over time and a hundred other technical things that I think you want a good artist to help steer you on. But he also can illustrate anything, and you can see that from his stuff online. You can't pigeonhole him into any one style. Even though I had a lot of anxiety about the process of finding the "right" thing, I felt pretty good about trusting him to get there.

I got to my appointment a little early, but Scott was already drawing, as I gave him a heads up about what I wanted. As much as I wanted to nail something down in advance, it was definitely more efficient to just be there and have some conversations with him. That's a weird interaction, because you're basically telling an artist how to change what they've done. I mean, it's constructive criticism, but I appreciate there's a human there. Anyway, from his starting point, we talked about shading the compass rose, and putting basically a mini-mandala in the middle, and then some sizing go arounds. The fourth time, I believe we had it right, and he worked up the stencil.

The first time on, he didn't like the way it was sitting, even though it looked straight to me. The curvature of the back, especially when I leaned on that leg, made it look kind of "bent". He washed it off and reapplied it probably 2 degrees off of the first attempt, and it made a difference. It was a little disconcerting because it was kind of a purple mess, but you could see where the lines belonged.

This was more "pokey" than my first one, and I admittedly winced a little toward the shin. I don't know if there's such a thing as good pain, but this feels like you're earning something. Total time in the chair was about an hour and 45 minutes, and about an hour before that spent on drawing and revising. The shading in the pointy parts didn't feel like much at first, but they felt like a sunburn afterward and looked pretty bad for the first few hours. Lots of good conversation in the shop, and it's crazy how these days you literally have people bringing their kids. Really great vibes there.

Is there any particular meaning here? No, not really. For a long time, I thought about ways that elements of some design could have special meaning, but over time, I kind of let most of that go. Ultimately, I just wanted to have something that was visually appealing to me, that felt like art. This became even more the case after Diana got her new tattoo a few weeks after my first one. For whatever self-esteem issues I've had in my life, the one thing I've always felt good about was my lower legs. Some combination of cycling in high school and volleyball in college created definition, and it has stayed there even while the rest of me has varied from fit to doughy and back.

What's next? I don't know, but I think I'm good for awhile. I really wanted to do these first two things at the same time, and last year. A part of me wishes I didn't wait so long, but I give myself a pass because, well, life has been pretty busy. As fast as the last ten years went, my focus the next ten is to be less busy. This will be a story from the year that I realized this. 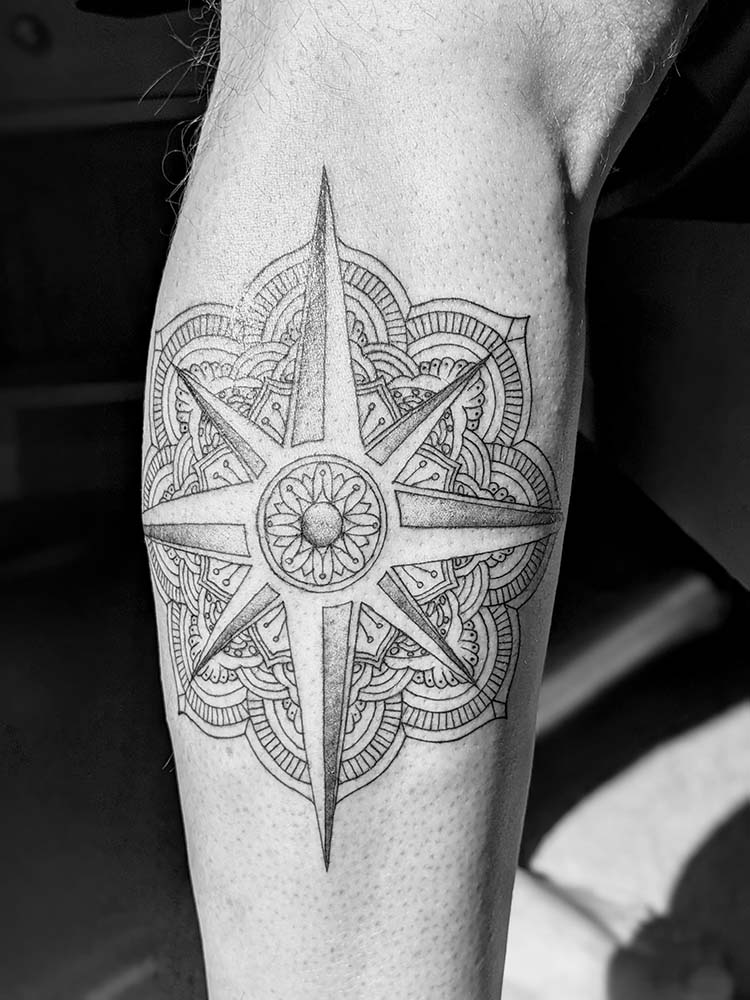