After the whole process of justifying the purchase of an electric sex space car, we started the process of actually buying a Tesla. As someone who is famously annoyed with (and secretly enjoys) traditional car sales, buying a Model S was more like buying something on Amazon.

The process starts with the design and options online. You can change exterior and interior color, wheels, trim packages and, of course, the battery size and drive train configurations. It's all pretty simple, and getting exactly what you want is just about the opposite of the typical car buying experience, where it's hard or impossible to score precisely what you want. Some of the options are of questionable value for the money, but it is what it is. You could conceivably get the price up to $140k. We certainly did not.

The introduction of the 70D and the release of the Model 3 being two years out were the things that motivated me. We did pearl white, the sun roof, leather seats, matte wood trim and the premium sound (for SiriusXM radio). Our range is 240 miles, which is more than enough to get between supercharger stations if we choose to do road trips.

Once you've settled on your design, you put down a deposit of $2,500 with your credit card. You have a week to modify the design or cancel and get your money back. After that, they commit it to the production queue. Within a week, they actually start making the car in Fremont, California, and it takes four or five days to build. Another day or two, and they put it on a train or series of trucks, depending on where you live. Order to delivery for us was six weeks.

From the time you order, the progress of the build and everything is available on the "My Tesla" site. You get to see your VIN before they even start building the car. You upload a picture of your drivers license, your insurance policy number, etc., so it's all on file and ready to go when your car arrives. You even make your final down payment online via an ACH transfer. It's all so seamless.

Meanwhile, they'll attempt to hook you up with financing if you require it, by working with partner banks. Naturally I watched various forums and rates, and it looked like I could pretty easily score a loan at 3% or lower for 72 months because we intended to put down as close to half as possible. (Our intention is to use the $7,500 tax rebate toward the loan to make it a more reasonable 60 months.) It just didn't seem like any of Tesla's partner banks would get the low rate, but surprisingly, Chase came through at 2.3%. They had another offer from another bank as well at a higher rate. I suppose it's possible that Chase simply knows my history, since our credit cards are there.

The trade situation was not ideal. In a "normal" car buy you end up having to dick around with getting what you want for your trade then what you want for the new car, with invisible forces at work (incentives and dealer rebates), and hope you're getting a good deal. Tesla is not in the business of used cars, so while they'll get the car appraised, at your house, no less, you're stuck with whatever bids come back from buyers. As I wrote previously, that didn't go well for a bunch of reasons, and I didn't get as much as I wanted. But I did sell it to a friend and I know she'll really enjoy the car.

The transportation took longer than Tesla expected, unfortunately, so we ended up getting the car about a week later than originally scheduled. Throughout the six weeks, a delivery specialist, local to the Orlando store, was there to take any questions and guide us through the process. It was a little weird that she wasn't actually there for the delivery, as she was off on that day, but I suppose that's fine.

When we arrived to pick up the car, it was sitting in the delivery room, washed up with a big red bow on top. I had to sign the loan contract and some Florida stuff, but that took not even five minutes. It was all ready when we go there. No waiting for the one and only guy who can process the financial bits, as you would in a regular dealer.

The DS walked us through the features of the car, which for me at least was largely a review, but it was still nice to have that thorough walkthrough. It's all very laid back and enthusiastic. It's not the vibe you get at a BMW dealer, for example. Tesla employees are all in jeans and there are no commissioned sales people. Once we were done, we were free to take our time and depart when we were ready. And a small bonus: They gave Simon a little Tesla T-shirt.

The delivery was a great experience, but we had the car only 24 hours before we had to park it in a garage for a cruise we had planned a long time ago. I had only one opportunity to launch it from a dead stop, but it was awesome and giggle worthy. I don't think that will get old. I'll write more after we've had it for awhile. 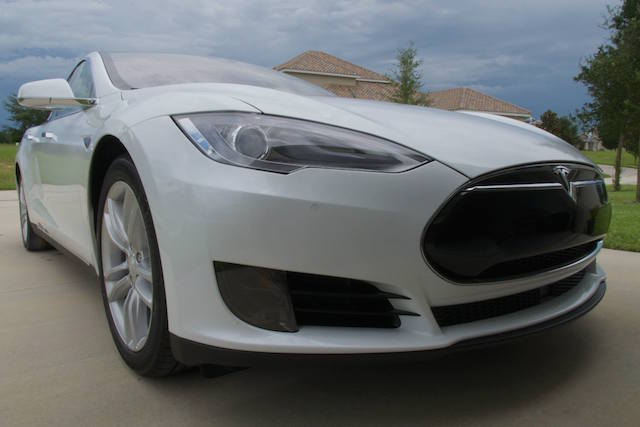 Did you pull the trigger on the autopilot? It seems interesting but not sure I see the value on the 2,500 dollar price tag.