Tesla is a terrible company with amazing products 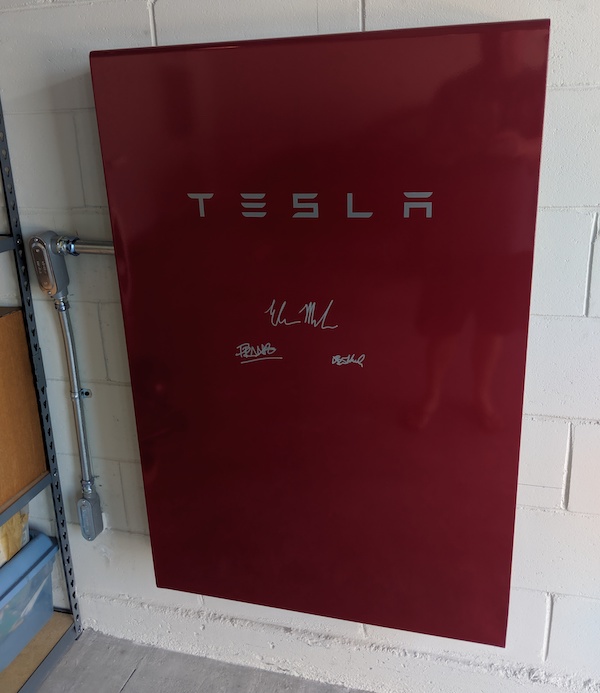 After two and a half long years, I finally got my "free" Powerwall to backup our power in the event of an outage. I say "free" because I didn't have to pay the $7,800 for the battery, just the installation, by way of the company's referral plan back when we bought the Model S almost four years ago. The program ended in December, 2016, so it actually took them that long to make good on this thing. It's signed by Elon Musk, Franz von Holzhausen (the car designer) and JB Straubel (the CTO).

Taking delivery of the Model S in August, 2015, was the first time since childhood that a shiny object with scientific significance completely blew me away. (That time in childhood was the first time I had a computer in the house, in case you were wondering.) Sitting in that car felt like being in a space ship, and I'm not exaggerating. Everything about the buying experience was amazing, and it resulted in driving this beautiful thing that moved my family around safely and without pollution. And I'm not even a car guy.

In early 2018, once we sold our previous house, we were next in line to order a Model 3, and I got some quotes for solar. Tesla price matched the best deal, and I wanted to go with them since I was entitled to the Powerwall reward. As they designed the system, they reached a point where they said the delay for the Powerwall would be a few months, and that time period got longer and longer as they basically stopped making them, since the cells inside are also used for the Model 3, which they were ramping up to produce. They set one poor expectation after another.

Concurrently, we ordered the Model 3. It slipped on delivery time more than once, but I tried to be OK with it. I was selling the S to my best friend's dad, who was fortunately flexible in the delivery timeframe. The person out of Vegas who did the scheduling was horribly rude when I asked them to fix their crappy CRM system, which to this day lists the alternate contact (Diana) on everything, including contracts, meaning everything ends up having to be done twice.

Taking delivery of the 3 was another big deal, but only because of the product. The enthusiasm in the store that we had from the staff for the S was long gone, and I felt like we were being rushed out. Similarly, when I had to take it in to replace the windshield, I couldn't help but feel like I was bothering everyone there. But whatever, it's still the greatest car ever made, to me. I love it.

Back to the energy business... Our solar system was installed on June 25, 2018, which also happened to be the day I started my new job. It took several extra weeks because getting the permits to me to sign was always someone else's failure, and the guy who set up the sale wasn't empowered to get it moving. But install day came, and everything looked solid and professional, but I had to wait for Duke Energy to put in a net meter. Here's where I learned for sure what I theorized in the back and forth about the Powerwall: No one at the company is in a position to make a decision and do anything. Duke finally put in the meter on July 12, put a tag on the door saying I was good to turn on the system, and so I did. Tesla was never going to get more of a notification than that, so they didn't even attempt to turn on the monitoring. I finally got a solid tech on the phone who took the serial numbers on the inverters to at least input the information into their system. It wasn't officially "on," but I could at least take the measurements on the inverters and see how much it was producing.

Except it wasn't. The daily totals were somewhere in the teens or low 20's, instead of the 40+kWh that are normal for July days. Something wasn't right. I called three times, and each time they were waiting for a notification to operate that would never come, even though I offered to send them photos of Duke's door tag, or even the meter itself. I finally got a support person with a little more of a clue, who got in touch with a field tech who was in the area on July 27. That guy came and found that the smaller inverter was not wired correctly, lacking a jumper on the inside to bridge the two channels that the inverter has. The very next day, production jumped to 41kWh. The tech showed me how the configuration worked while he was there. He also pointed out that my larger inverter, tied to my panels facing south, was only able to do 5kW, even though the panels can produce 6kW. I'll get back to that.

The next day, I was surprised to see mid-day that the larger part of the system, the 6kW (or 5 because of the inverter), was producing about as much as the 4kW segment, which faces more west, and that didn't seem right. Turns out there's a setting for parallel vs. independent, which depends on how the panels are wired in two strings, in this case. As mine are two identical strings facing the same way, it should have been parallel, but was instead set to independent. I could see the output immediately increase when I changed it.

More than a week would pass before they would turn on the monitoring, even though they quite literally had a guy touch the system to confirm it had the blessing of the utility. Why? Because no one at the company can make any decisions on anything, or call the right people.

The aforementioned under-provisioned inverter is a real sore spot though. It's not uncommon that I can walk up to the inverter, and see that it's pegged at 5,000W, even though the panels feeding it could be producing as much as 6,100W. While there are some minor curves in the efficiency of panels and inverters, I know that they can hit spec. The other, west facing panels, 13 capable of doing 305W each, have driven the 4.2kW second inverter to about 4,000W, which exceeds the 3,965W they're collectively rated for. That's super frustrating. My recourse at this point is to initiate arbitration, or take them to small claims court. I'm not excited about either action.

I finally have the Powerwall today, but of course, that already has an issue. They installed the monitoring equipment incorrectly, so it thinks that the energy that I'm pulling from the grid after sundown is going from the solar to the grid, when it should be from the grid into the house. Of course they can't get it right the first time.

I love the cars, I love the energy products, and I'm all-in for Elon's vision, but the people in between are running a shit show. I think the company desperately needs a COO or someone who can focus on customer experience. If we operated like this at work, I'm certain that our investors would have us all replaced. You can't treat customer interaction like an assembly line, where someone creates the order, another gets permits, another designs your system, another installs it, another supports it, and no one is accountable to each other, or the customer. That system doesn't work.

I imagine it's just growing pains, but the company's reputation is taking a beating online for this sort of thing. They've gotta turn it around.