The best car deal ever

We started leasing our Nissan Leaf in August of 2014. We did a 2-year lease because frankly we were not entirely sure what getting into an electric vehicle would mean. A short lease seemed to mitigate any risk, which we may have overlooked because of our general enthusiasm for EV's. This turned out to be the right decision for so many reasons.

First off, the Leaf hasn't been great about retaining value. I think sticker was around $34k at the time, before the $7,500 tax credit. They haven't retained value very well, not because of any issue with the cars themselves, but because a bigger battery variation of the car has been in the works or rumored for at least two years. Ours has a 24 kWh battery, rated for around 80 miles but in practice can do 100 if you're not doing all highway miles. Last year they bumped it to 30 kWh. To be clear, this is more than adequate for 98% of our driving scenarios because you wake up with a "full tank" every day. (We even charge on a lowly 110v household outlet!) Still, battery costs have come way down while power density has gone way up, so everyone fully expects the next version to have capacity that enables 200 miles, presumably something around 60 kWh. We're totally winning by not owning the car.

At the end of our two years, we were actually not at all ready to see it go. I thought a compact Toyota was crazy low on maintenance, but this little EV takes it to another level. Without oil changes, there's nothing to do. We're closing in on three years now, and there's literally nothing to do except rotate the tires now and then. So Nissan was good about extending the lease for another year, and by the way, take two months off of paying. That gets us to August 2017.

Second, did I mention the delays in introducing a follow up car? Chevy finally got the Bolt out into the world, but the rollout is slow and production numbers aren't great. We don't know if we'll see one in Florida in the summer or not. Dealers don't have any idea how to sell them, because dealers are worthless middlemen continuing a process that no consumer likes. But at least Chevy has something out, while Nissan has been quiet. Lately, car enthusiast sites are finding "spy shots" of a camouflaged new Leaf driving about.

Nissan doesn't want our car back, they want us to buy another one, and so they've offered to extend the lease another seven months, and by the way, have three months off of paying.

This gets us to 43 months total at $106, and 5 of those months were non-paying months. I think we got $5k for Diana's trade, and used that as the down payment. That's $4,028 in lease payments, and $5,000 down, making the total cost per month to have that car $210. I've not had any new car, out of 9 total (including Diana's), that were that cheap in terms of total money put into having the car, purchase to sale/return. And by the way, the cost of driving it works out to 3.5 cents per mile. A gasoline car that does 30 mpg at $2/gallon costs 6.7 cents per mile. An SUV at 15 mpg will be 13 cents per mile, or 3.7x what it costs to drive the Leaf. As gas goes up, so does the cost, while ours comes from a regulated utility. And by the way, it's like driving an electric go-kart and it's super fun.

Just imagine what's going to happen when sub-$30k EV's are a thing in a few years. 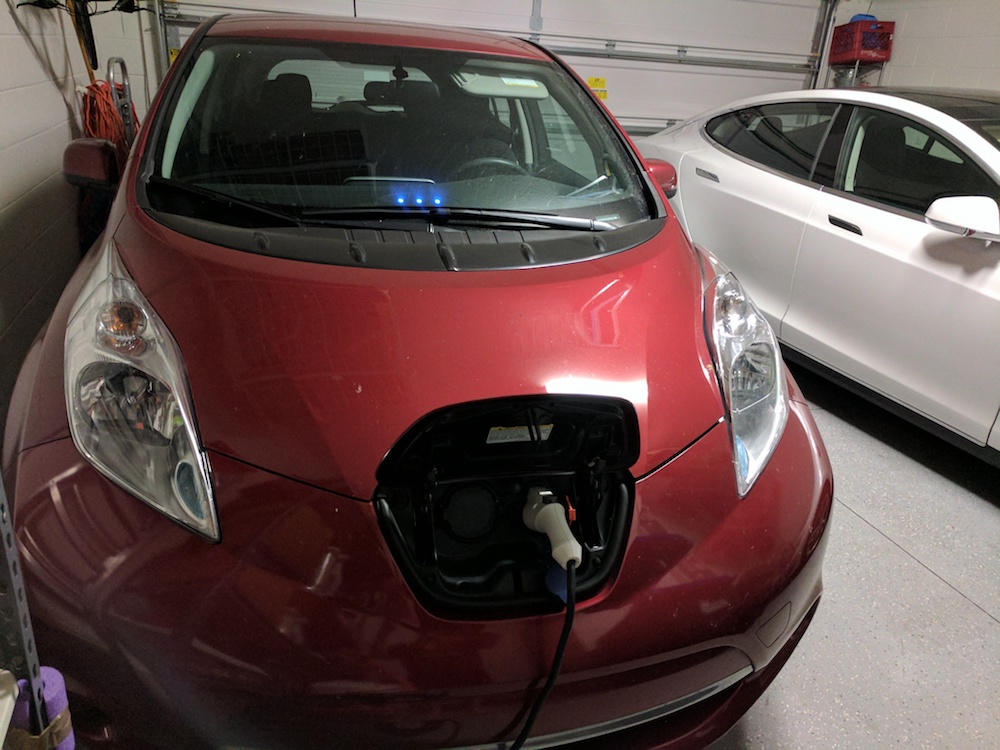