The boys, out and about

Diana had a little setback with foot pain, and we had been planning for a day out at Magic Kingdom, all three of us, for some time. This was the first day in three weeks that the projected crowds might be reasonable after the holidays, and Simon has been begging to go. He has been so stuck here between Diana's immobility and the cold that has been lingering among us. I figured we would have a boy's morning out at the park.

That morning turned into an afternoon, which turned into darkness. I couldn't believe how the enthusiasm with which he wanted to go from one thing to the next. The OT who diagnosed his SPD said that in some cases they prescribe a "sensory diet" for kids who need it. Given his recent behavior at home lately, where he has been rough and unintentionally violent, I finally get what she was talking about. He needs that stimulation or he gets all of this pent up energy. Lots of walking, and a few roller coasters here and there, go a long way to help him.

Certainly I would prefer that all of Team Puzzoni was hanging out, but I don't for a moment take the personal time with Simon for granted. I know the window for hanging out with dad as something that's cool is not large. We've had a lot of struggles lately, especially here on Christmas break, and it was refreshing and awesome to finally have a good day with Simon. He's a good kid, with a good heart, and a lot of love to give. I'm so grateful for every minute I get to spend with him, no matter what we're doing. 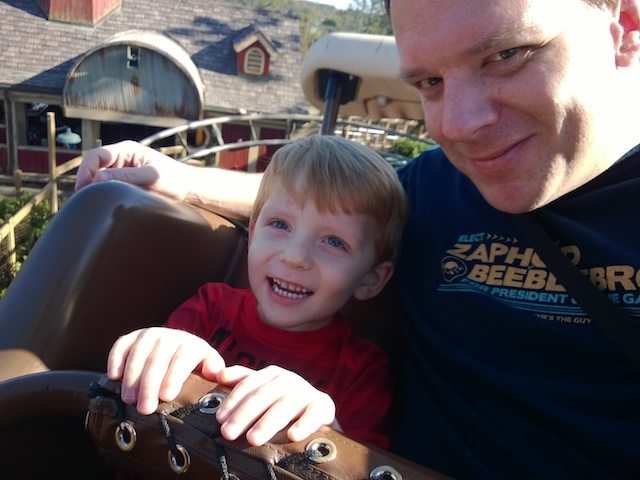 Good for you!! Enjoy every minute you can! I thought about you today when the little girl who benefited from Give Kids The World, passed away at the age of 7. She benefited from GKTW. I thought how wonderful you involvement in it helped her family and created many memories. Enjoy Simon every minute...good and bad! Life is short. God Bless you Jeff!