[Note: This was actually written the night of the accident, on Christmas Eve. So far, Progressive has not lived up to my expectations, and I don't know what the fate of the car is, a week later. I don't even know if it has been moved to the shop or if anyone has looked at it. Pissed.]

Today was not a good day. It could have been worse, but I'm not quite to the point yet where I can think in those terms. We split a drive down to North Carolina into two days, so we could get a head start Friday after work, leaving us hopefully rested for Christmas with Diana's family. It didn't quite work out that way.

We were sitting at a light in Bristol, Tennessee, when I looked up in my rear-view and saw it coming. A pick-up was barreling down on us at full speed, probably 35 mph or more. I started to pull up and attempt to get out of the way, but she was just coming too fast. She pushed me into the intersection, and an oncoming car turning left into a shopping center creamed me from the front, essentially sheering off the front of the car.

The impact was somewhat violent, but I suppose these things are easier to take when they come from behind. I don't know, I've never had an accident. The front was fairly low speed, pushing the car more than anything else. The car didn't even die (as far as I can tell, but it's a hybrid, so the engine wasn't running in the first place), and I was able to drive it off to the side, dragging all kinds of fragments with me.

Diana and Simon both appeared confused, but not hurt. The adrenaline and anger was immediate and intense. I got out of the car and yelled to the woman driving: "How the fuck do you hit a stopped car like that?! What the fuck were you thinking?!" Her reaction was one of apology, then anger. At that point I went back to focusing on my family. Simon started to cry, I think because he had never seen Daddy be that intense and angry. I surveyed the car, and couldn't believe that the front was essentially gone.

The car that turned in front of me was an older model "big" American car, and the body damage wasn't that substantial. Not good, but their car was at least driveable. At this point it appeared that everyone was physically OK, and I was trying my best to not even make eye contact with the woman who started it all. The crazy woman proceeded to tell Diana how sorry she felt for her and Simon that they had to live with a big jerk like me. Whatever.

Two officers and their sergeant showed up and worked out what was going on, though oddly didn't really ask me anything beyond my initial statement that the woman plowed into me. She was getting belligerent with them about something. Apparently it wasn't even the first time the reporting officer had encountered her today, but naturally he couldn't say why. The woman was cited for causing the accident, and unfortunately the other driver from the oncoming was cited for not having proof of insurance.

While the tow truck worker cleaned up and tried to figure out how to shift a hybrid into neutral, one of the officers brought over a stuffed animal for Simon, which was such a great gesture. Simon was too worried about what they were doing with Daddy's car. The cops allowed us to hang out at the police station until my in-laws could make the two and a half hour trip up to get us. I can't say enough good things about the Bristol PD. What a fantastic group of people.

I don't really care about the car. I honestly hope that it's a total loss because otherwise we have to figure out how to get it once it's fixed, and that's a huge pain in the ass. When we went back to get the rest of our stuff out of it, I noticed that the back door seemed a bit stuck. The trunk compartments had also been compressed, which wasn't obvious to me at the time. The adjuster and the tow truck guy think it's a close call. Obviously if there's damage to the frame, that's a lot more serious. Like I said, I don't really care about the car, but if I can avoid having to go back to Bristol to get it, that would make life easier (and cheaper).

Simon really came through it all like a trooper. He found that the police break room had plenty of cupboards and a door to open and close to his heart's content, and he did so for almost two hours. He was a hit with the officers who came in and out during that time. I somehow bruised my shoulder blade. Diana's upper arm somehow got bruised, by the belt I think, but like me, I think it was the emotional stress of the whole things that most takes its toll. It could have been much, much worse.

As for me, I'm still not ready to just be thankful it wasn't worse. I'm still too angry that some idiot who isn't paying attention could literally kill you and your family in a situation like that. I can accept that people make mistakes and sometimes make poor decisions that lead to relatively minor accidents. I get that. But when you plow into someone at full speed, a stopped car, that's neglecting the most basic responsibility you have as a driver and you have no business driving.

The worst part is that there's the lingering feelings of not wanting to drive, being paranoid about driving for some amount of time... just a ton of shitty feelings. And on Christmas Eve no less! Needless to say, I spent some quality time with Simon tonight when we finally got to a point where we could put him down to bed. Everything is higher stakes when you've got a little person and a spouse. 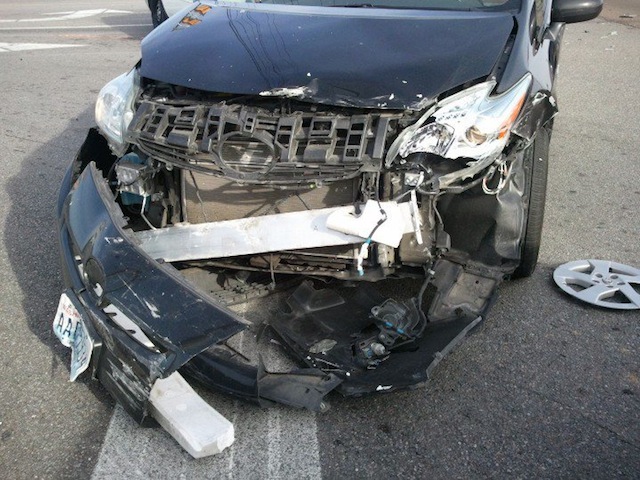