Today was a good day 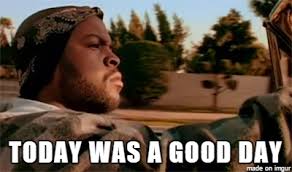 I was talking with a candidate at work about time off, which happens to be unlimited. Maybe that sounds like something ripe for abuse, but on average I believe people take about three weeks off per year. All things considered, that's actually pretty good in America, if well below what Europeans take.

For people at my career stage, you'd probably start with four weeks off even if they keep track. In my first year, I took 16 days off, and none of that time was five straight days that included a non-holiday. You could look at that two ways. The first is that I'm really dedicated to my job, and that's good. The second is that I may have been neglecting my priorities as a father and spouse. The reality is probably somewhere in the middle.

Summer went by fast, and suddenly I realized that we were coming up again on the start of school. Simon has one last camp next week, and then it's back to the classroom. My window for family time was slamming shut. So last week, faced with an insane amount of meetings, I made a day off for today happen. Originally we planned to go to Busch Gardens Tampa, but the rain forecast was dire, so we went to Universal instead (where most of the rides are indoors). When the rains did come, I spent time with Diana just binge watching some Veronica Mars.

Today was a good day.

I can't let time get away from me like that anymore.