One of my consistent go-to's when we cruise it getting a massage. It's never a cheap endeavor, but it always feels like vacation. On our triumphant return to cruising before Christmas, I decided to try something new, especially given Covid and the idea of being in a small room with a stranger for 90 minutes, and Diana and I agreed that we should do his-and-hers pedicures. I've never done that before, but it was very much like the thing I'm looking for on every cruise: I want someone to just look after me and take care of me in a way that I wouldn't encounter in regular life. I'm kind of ticklish when it comes to feet, but whatever, I thought I'd give it a try.

I actually enjoyed it quite a bit. When I plopped my feet on the stand, I was surprised that the manicurist said I have "really beautiful feet." Strangest compliment that I've ever had, for sure. Going into it, I thought, you know, I don't get a discount for not having any nail polish applied, so I'm going to go goth and get the black nail polish. It reminded me of some interview I read more than a decade ago, where Shirley Manson, singer of my favorite band Garbage, and a decade junior to the boys in the band, talked about painting their fingernails as a tour ritual. I thought, you know, if it's good enough for dudes 20 years older than me, it's good enough for me. I fancy myself a little as a wannabe rock star anyway.

I wasn't trying to make a statement or anything, and honestly I spent much of the cruise amused at my funny toes. I'm still amused by it, especially now that I can see precisely how much my toenails have grown in three weeks. But as we were in concierge for that cruise, and hanging out a lot in the concierge lounge (where the drinks are included), I did wonder if the fancy people noticed. Not the young woman with piercings and tattoos vacationing with her mom, but definitely the woman bragging about her 14 Christmas trees in her 6,000 square foot house. Yes, as it turns out, I was judging while wondering if I was being judged.

Whatever, I didn't think much about it until Christmas, when a family member, who had seen my Instagram post about my feet but clearly didn't swipe to the second photo (below), was somewhat appalled by what I had done. She made some comments about how she was raised, and I called her out: Her definitions about what constitutes gender norms was not her choice, as she learned them and never questioned them. It was not my intention to make her uncomfortable, but clearly I did. It goes back to something I wrote about last July, that we adhere to cultural norms that we certainly did not choose. She expressed outrage about something she saw on Fox News about some school asking a child about what gender they thought they were, but this isn't even about that.

The objective reality is that boys play with trucks and girls play with dolls because that's a cultural standard that most people never really opt-in to. It was just there. The same is true on any number of stereotypes, whether it be trivial things about who uses cosmetics or who assumes the primary roles in raising children or providing income. These are all arbitrary.

I'm not trying to be some kind of woke-monster here. I never really thought about it until I had a child and started working through the possibilities of who he might be. For the whole range of identity possibilities, including sexuality, gender identity and just making choices about what's comfortable, I don't know what he'll arrive at. I just want to make sure that if he has any feelings that don't align with any of the conventional things that have to do with having testicles, that he feels like he can come to us with those feelings.

Thinking through it, it's kind of odd that women in our culture do all of the pretty things. History seems to indicate that the Egyptians took the opposite approach, with men being made pretty, and even colonial America had men wearing wigs with big hair. Other animals, especially birds, think peacocks, make the boys pretty. And us humans, look at us. Men get the pot bellies, the receding hairlines, body hair everywhere, while women get the curves and keep the hair on their head mostly. Doesn't it seem like men should be using cosmetics more than women? And don't even get me started about dresses. Men have the dangly parts and yet we're expected to wear pants. The gender norms are arbitrary, at best.

As for me, if I get another pedicure at some point, sure, I'll get the black polish again, because 🤘. I don't think I would actively try to keep it up myself, because it seems like a lot of work, and I wouldn't say I "feel pretty." I think my bigger point is that, it shouldn't matter. I'm not going to be bound by arbitrary norms. 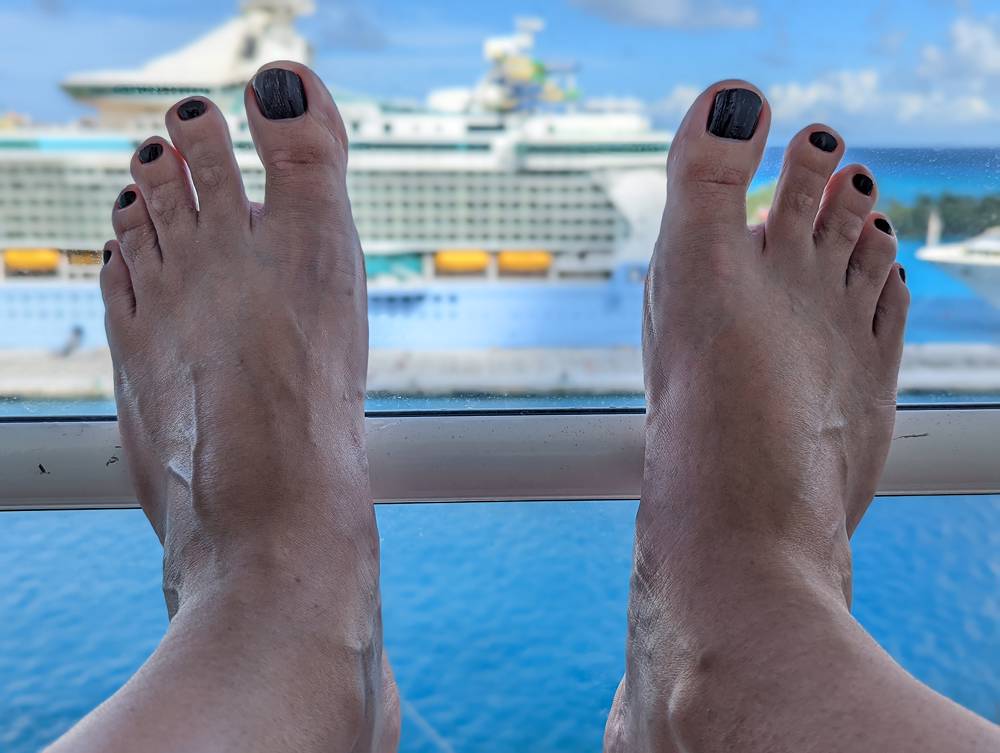