We should talk about colonoscopies and stuff

I got doubled probed today... colonoscopy and endoscopy. The screening age for men for colonoscopies now is 45, down from 50, because the data shows that it reduces cancer deaths by catching more of it earlier. So as much as I would rather do most anything else, I'm due. I think it's important that we talk about it openly, because there are certain types of cancers and illnesses that range from super treatable to preventable, but only if we act. I think you know how I feel about our current track record at preventing death and illness. It's not great. I'll get back to that.

The endoscopy was to see what's going on in my esophagus, because I periodically, about every three or four months, have an issue where swallowing becomes difficult to the point that the food stacks up and I have to launch it the other way. It's not pleasant. That has been going on for seven years, and reasonably my doctor was like, dude, you need to get that looked at. The verdict is esophagitis, which is inflammation caused usually by reflux. Not sure yet what the treatment plan will be, but it's likely triggered by certain foods.

The colonoscopy was clean, with no polyps removed, which is awesome and I don't have to do that again for a decade. The doctor did observe diverticulosis, which everyone has eventually, and one might describe it as road rash for your colon, with the inner bits pushing out the outer bits. It's super gross, but not usually something to cause problems.

I had to wait more than two months for the procedures, which as you can imagine was plenty of time to build anxiety over them. If you're unfamiliar with colonoscopies, they need to get you as shit-free as possible, then blow air into your colon so they can get a good look with a camera on a long tube, up and around your large intestine. If they find any polyps, they'll do their best to pull them out and then have them biopsied.

The magic starts the day before, where you can't really eat anything. Clear stuff, chicken broth and the like is supposed to be OK, but nothing solid. Living in Florida, I couldn't imagine "soup," so I binged Sprite (and brushed my teeth an extra time). Then around 5 or 6, you chug 6 ounces of "bowl prep" diluted in another 10 ounces of water, and it's the most disgusting fucking thing you'll ever drink. Inside that first hour, you have to down another 32 ounces of water. Before that hour ends, yeah, you're going to spend some quality time in the bathroom. Honestly, aside from the disturbing audio, it's not that big of a deal, were it not for the hunger and the memory of having to drink that stuff. I was basically done inside of two hours.

You have to repeat this cycle in the morning, several hours before your scheduled appointment. For me, that meant about 6 a.m., and it was just as vile this time, but I got it down faster. The waterworks were done by 8.

I checked in around 11:30, and was being prepped by 12:15. I got naked and into the gown, and moments later they brought in a blanket that was super warm. The two nurses were lovely and had excellent bedside manner. One had me wired up for the sensors and blood pressure cuff, while the other one put in the IV line. (Sidebar: the O2 sensor and blood pressure cuff were disposable, which seems like a horrible and unnecessary waste.) Despite getting moved up to an earlier appointment, I ended up having to wait for about 45 minutes before I talked to the anesthesiologist. I didn't catch his name, but his accent implied he was originally from the Caribbean. They use the kind of anesthetic that essentially puts you to sleep. A few minutes later they wheeled me into the OR.

I wasn't awake long enough to get familiar with the OR. I didn't even meet the gastro doctor until after. They gave me oxygen (I saw the O2 meter hit a solid 100% almost instantly), then propped me up on my side. They asked me for about the sixth time my name and the procedures they were doing and checked my wristband to match. I woke up with all limbs and kidneys, so this checking worked. One of the nurses had me bite down on a teeth guard for endoscopy scope, and they kind of snuck in the drugs at the same time because I don't recall anything after that.

My sleep started to lighten up and one of the nurses in recovery started to call out my name, and there's a non-zero chance that I may have been audibly swearing. The clock said 2:35, and I'm pretty sure I got into the OR at 1:50. I woke up pretty fast, and aside from still being insanely hungry and thirsty, didn't feel worse for the wear. That's when I talked briefly to the doctor, who seemed in a hurry to be done talking to me. I have a follow-up virtual appointment with him in three weeks, but I'm wondering if that's even worth it since there's nothing to biopsy.

When I got home, the exterior painters were packing up, and it felt like coming home to a new house. After loading up on food, I started putting the patio back together and resumed the day.

Now, as much as I didn't want to be alien probed, logical adult me knows it was necessary. Hundreds of thousands of people have died this year just because of a million bad reasons not to get a shot that doesn't even cost you anything. I can't explain it. We have crappy outcomes in the US relative to many (most?) industrialized nations, and there aren't many good reasons for it. We make poor choices.

But we also have a serious problem when it comes to how we pay for healthcare. These two procedures cost me over $600 out of pocket, and I have "good" health insurance. If you make $15 an hour, that's easily a third of your take-home pay in a month. That's why this is morally problematic, because we have technology that can prolong every life, but only if you can afford it. That troubles me. Those kinds of outcomes shouldn't be based on a birth lottery.

And sure, this is where people start conjuring up the socialist boogeyman, which apparently exists only in America, but I'm here to tell you that nothing could be better for capitalism than a single-payer system not dependent on employment. How many people don't start their own business or avoid gig work because they need health insurance? (That's me, if you have to know. Simon's ADHD meds alone would be a financial hardship without insurance.) How many people bring disease into work and get other sick because they can't afford to see a doctor? How much productivity is lost for people can't afford even basic preventative doctor visits? This problem costs American businesses over half a billion dollars and 1.5 billions days of productivity lost every year.

The system is taking care of me, and I'm thankful for that. It's important to do the work, for ourselves, and our families, so we can be around for them. But it shouldn't have to be a fiscal choice. 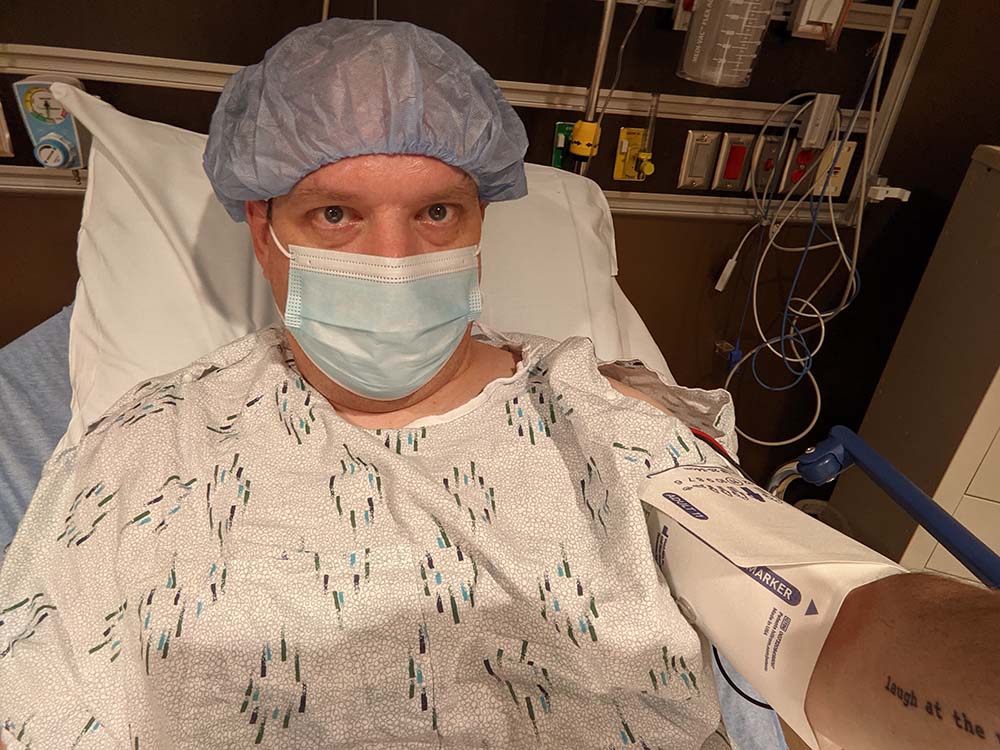