All the camera compromises

Last week, Canon announced the latest in their line of cinema cameras, the EOS C70 (News Shooter has a great write up here). I figured by way of the nomenclature that this would be a really inexpensive 4K camera to sort of replace the aging C100, which only works in regular HD. But no, it turns out, it costs as much as my C200, which without rebates is about $5,500 still. I think Canon is going to sell at ton of these because of the size of the body and versatile and excellent recording formats. What's interesting though is that this one has other compromises. There's so much give and take among the Canon models that the only way you get it all is if you spend five figures, which is not something a deep hobbyist (and former pro) like me is going to do.

Before I get into that, I've wanted to switch to Canon for a long time. My still camera bodies, going all the way back to film, have all been Canon. When it came time to buy that first body, an Elan IIe, I just liked the ergonomics better than Nikon, so here we are. I went digital with the cropped sensor 10D in 2003, which was a breakthrough for the price, then the 5D in 2008, which was a breakthrough for being full-frame at that price. I added the cropped sensor 7D late in 2009, and it could shoot video! While it was always kind of awkward to shoot video with the 7D, the color was beautiful, and it has translated well into their cinema cameras. I also invested a lot of money on lenses over the years, and I've made thousands of photos with them, some of which I'm very proud of. Heck, my friend shot my own wedding with the 5D!

So in the world of video cameras, what I look for is low-noise images with lots of dynamic range, good color science and the ability to put good lenses on it for that "cinema" look of narrow depth-of-field at 24 frames per second. My last camera, the Panasonic AF100, wasn't bad in that respect for regular HD resolution. I have an adapter for it that allows me to use all of the Canon lenses, and it's a "speed booster" that focuses on the smaller sensor, and so it gives you an extra stop. It made some nice images, especially outdoors, if you were careful with the exposure.

In moving up, my only additional wants were that it would be 4K resolution, and I wanted to stick to the Canon EF mount. So here's what I think my ideals are, what I got, what the new C70 has, and some notes.

As you can see, there are a lot of little tradeoffs between the two cameras, but I think the folks that love using those small mirrorless cameras will love the C70 as a substantial upgrade. Canon lenses are pretty great. There are a bunch of third-party manufacturers doing great cinema style lenses too.

I do love the look of the C200 and I'm starting to feel confident shooting with it. It's way more forgiving than my old AF100 in terms of exposure, especially when shooting raw. You can be like four stops off and easily save what you've got. I think it would have been a tough call if the C70 was out three months ago, but having the raw capability, as difficult as the workflow might be, would allow me to submit to certain outlets like festivals and broadcast if I ever was ambitious enough to shoot something worthy of that. You never know... I sold some stuff I shot on the AF100 to a production company doing a show for Discovery.

Video camera technology has an interesting mix of limits, depending on the goals. I think a lot of people want it to capture as much resolution as film, which depending on the sensitivity, might already be the case for 4K. I mean, Episodes 2 and 3 of Star Wars were shot in good old fashioned 1080/24p HD, and they still look better than the shitty dialog. 8K certainly exceeds the capability of film, but the storage required for it is huge and the Internet might not be able to handle streaming it for a long time. 1080p is still what most people have in their homes, and it has been working for two decades. I've had two pro cameras in that time, lasting me 6 and 8 years. I think the C200 can easily go that long. 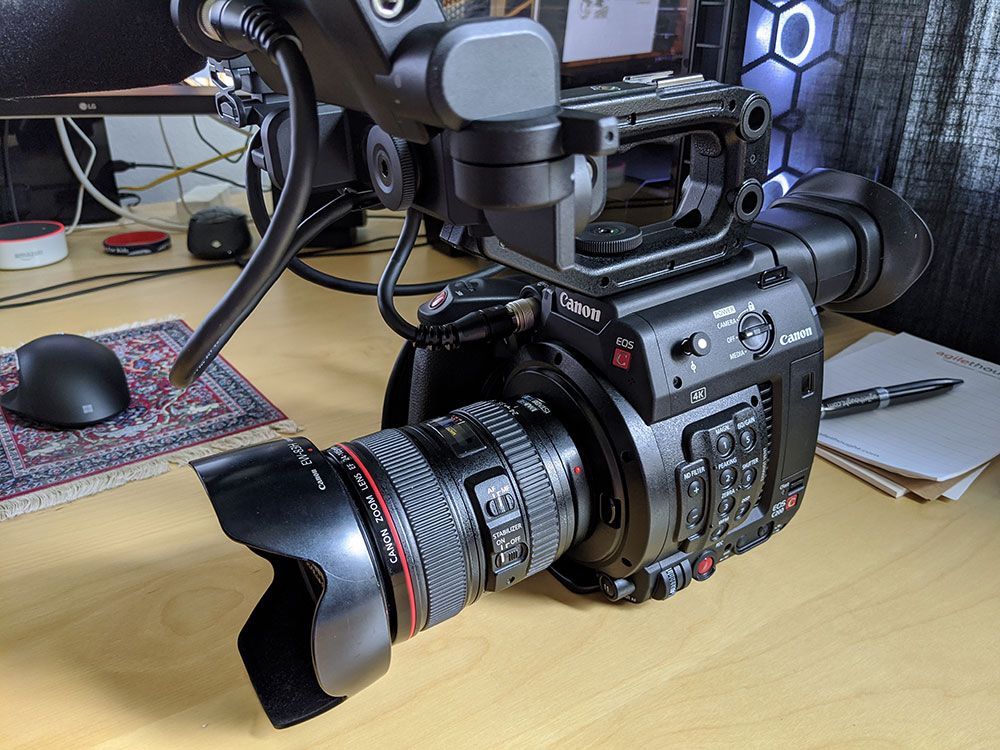