The financing nonsense around our last house kind of sucked the joy out of the process. We were well qualified to buy a house, but the underwriters couldn't go off script and acknowledge that I had a job because it was 1099. We quite literally had to fight through the last few days prior to closing. Picking options, we didn't know if they would really be ours. Our construction manager was often non-responsive and kind of useless as well. KB Home did not leave a strong impression, though I was perfectly happy with the house quality once everything was resolved.

The new place is being built by Pulte, same builder that did my first house. That house was kind of cheap, and we got into the sale after the options had been picked, but the warranty work after the sale was pretty solid. Then my BFF built a Pulte this year, and they did a pretty good job. In fact, we're doing the same floor plan, only reverse and in another neighborhood. Despite the dubious rationalization, we're pretty excited to spread out in the new place, host awesome holidays, have friends stay from all over, etc.

I hated the idea of choosing options, because that's where the builders kind of screw you, but we managed to get most of the things we wanted while staying on budget. I'm anxious to see them together in real life, but I feel like we have a good mix that appeals to our style without being too trendy. We learned a lot from the experience of our current house. For example, we decided we could do a backsplash ourselves in the kitchen, but we never did. Ditto for painting. We also learned that a loft area isn't something we find particularly useful. From a floorplan perspective, the single most important thing for us was a two-story living room and as much glass between the living area and the outside as possible. Natural light is so important to us. We skipped on another builder that was way, way less because it lacked the high ceiling and sliding doors. There were far larger houses that we liked less also because they lacked those features.

I think it will be fun to decorate, too. We don't anticipate having to buy very much, because while the house is larger, it's about the same number of rooms. We'll have to buy some ceiling fans, light fixtures and some rugs, and there are some opportunities to do goofy HGTV things like accent walls. We'd love to install solar before Congress does something silly like repeal the tax credit, but the timing will depend on what our current house sells for. With more space to cool, and electric cooking and water heating, and electric cars, I really want to embrace renewables.

So far, construction seems to be going well. The manager this time was able to move the main water shut off for us, which by default was near the garage door, too close to where cars go. He seems to be very responsive to concerns, so I hope that continues. The bulk of the work will happen in the next eight weeks. From ground breaking to today, with the foundation and brick up, only took two weeks. We'll have to stay out for about two weeks, because the framing is a little dangerous until it's done and they have the temporary railings up. After that, we can make sure the rough-in makes sense, especially the electrical.

House construction is pretty cool, especially with the building codes here in Florida. This should be fun! 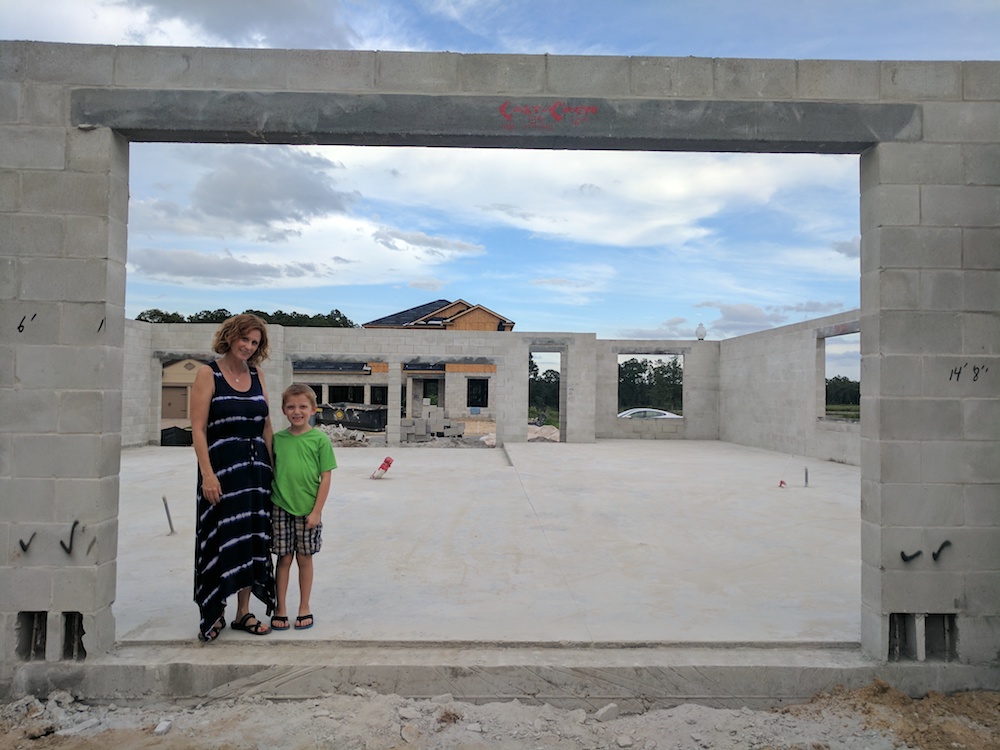