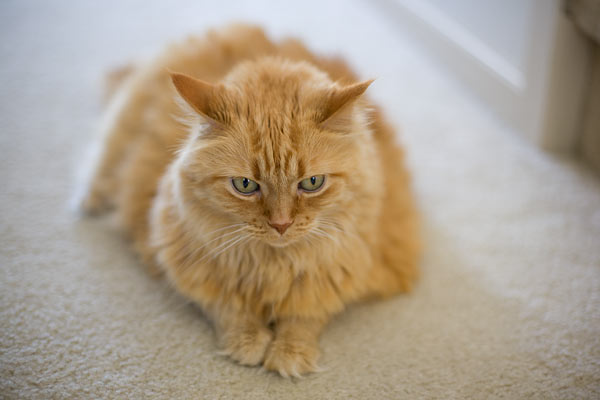 I had to let Cosmo go today, after 16 wonderful years. Whatever was eating away at her (the vet theorized it was some kind of bone cancer, based on her blood work), it eliminated her appetite. I don't think she had anything to eat or drink in the last few days. I hate having to make these kinds of decisions, but it was a lot easier than it was for Luna. Cosmo didn't fight it at all, which given her nature toward most people who were not me, is a pretty good indication that she was ready.

It's weird to think about all of the changes in my life in the last 16 years. Cosmo has been with me through two marriages, five places to live, almost a dozen jobs, and more ups and downs than I could ever count. She was a constant through all of that. Part of her unique "charm" was that she really didn't like most people, let alone other animals. She liked me and Stephanie, and I think she eventually warmed up to Diana. Anyone who was a hardcore cat person, she kind of knew it.

Her personality changed a lot when Luna showed up, but she also seemed to have a certain motherly quality to her when Luna was sick. She always stopped short of grooming her, but seemed to look after her. She might have been bitchy, but she seemed to respond to people who were sad. I remember having a bit of a break down after the separation, while struggling with a new relationship, and Cosmo paid extra special attention to me. As recently as a few months ago, she gave the same attention to Simon during one of his meltdowns. Any other time, I don't think she was particularly fond of Simon.

She was a ton of fun in her early years. She played too rough for the most part, as evidenced by the scratches that Stephanie and I usually had, but she was an amazing leaper. If you were standing up and put your arm out, with your hand set to grab, she would jump up, plant her face in your hand to bite, front legs around your wrist, and lift her rear legs up to dig on you. It was really something to see! She also would jump at various whip and string toys three to four feet in the air.

When Diana and I began to cohabitate, and we became a four-cat household, Cosmo was indifferent. She was the queen of the pride, and she knew it. Oliver would try to fuck with her from time to time, but she wasn't having it. I know she bit him on a few occasions, and he eventually respected her.

My favorite interactions between Cosmo and other animals were easily those with Cosmo, the Boston Terrier that my former girlfriend and then-vet student Catherine brought into my life. That dog was hell bent on being the cat's friend, and she was so persistent. The dog would bark at her and try to bait her, and Cosmo just didn't give a shit. The dog would try to nap near her over and over, but knew better than to get too close. Again, I think Cosmo was just too proud to admit she liked the dog. Cath jokingly said, from her experience working in animal hospitals, that it was cats with Cosmo's temperament that tended to live the longest. She was right.

About a year ago, she had a UTI, and I took her to the vet. Her urine was already starting to appear diluted, so her kidneys were already starting to go. That wasn't enough to get her down though, and most of the last year she was relatively active. Her fur became a problem, because her tongue had almost no texture and she struggled to groom. The last few months, she also seemed to be suffering from arthritis and she was moving slowed. The anemia that was theoretically caused by cancer was making her sluggish. Two weeks ago, a steroid shot bought her some time, but today it was hard for her to even stand up. She was so dehydrated.

In some ways, I'm glad her illness progressed as fast as it did, because I don't want to remember her that way. It still hurts that I couldn't help Luna, who battled with issues for years. Cosmo and her evil streak kept her strong almost to the end, and she was ready. She was a great cat, and I'll miss her a great deal.

Here's Cosmo today, getting a last bit of sun. Unfortunately, she didn't stay there long, I think because the light bothered her. 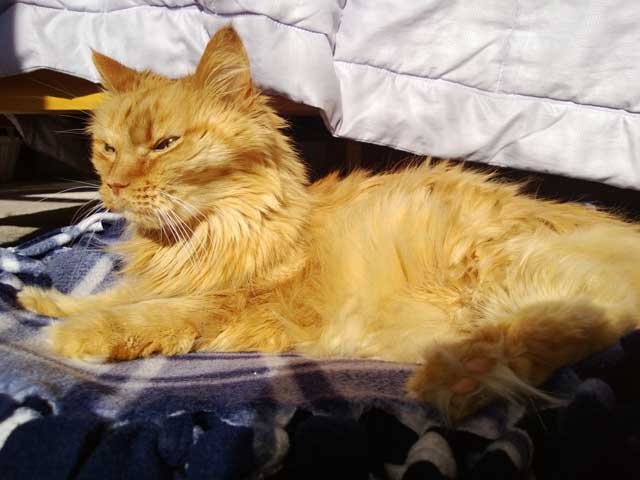