It's hard to believe, but today we brought home our third generation of electric vehicles, a Tesla Model Y. We were planning to go this route in August, when the lease expired on the Nissan Leaf and the other car was paid off, but since the Leaf was totaled in an accident (Diana was fortunately OK), we had to move up the schedule a bit.

The Y is the cross-over/SUV-ish version of the 3, which is to say it's taller and opens wide in the back to carry stuff. It's only a couple of inches taller, wider and longer, but next to our 3, it looks enormous. Tesla doesn't really have model years, because the cars are constantly changing. In our case, your drivetrain options were regular and performance, both with all-wheel drive. Shortly after we ordered, they started selling a "standard range" model with 80 fewer miles, rear-wheel drive only, for about $9 less. I really wanted the AWD, because it's super fun to drive, and doesn't slide out hardly at all when you corner like a moron. We also got the red exterior, white interior and a tow hitch as upgrades. We may explore a camper rental. All things considered, it was the same price as our 3 was three years ago, but now you get the dual-motor (AWD) configuration and basic autopilot included in a bigger car.

There are some nice changes here and there compared to our 3, but also some things that they cheaped out on. Because of hatch trunk, there are no cross-members across the rest of the roof. It's just one big piece of glass, which is one of the reasons it feels so big in the back seat. The trunk is powered, which should be standard in any non-economy car. As I said, they include the basic autopilot now, which means it will steer itself in stop-and-go traffic, but that doesn't include lane changing and summon the way it did back when we had a Model S. They're using slightly nicer wheels as standard as well. The side windows are now double-pane, apparently to reduce noise. The center console phone cradles now do wireless charging, but we missed out on the refreshed, nicer center console by about two weeks. It was already in the current 3, and the Chinese Y, but just started to hit the US Y's. The biggest change is that it's not the "piano black" substance that looks terrible because it attracts dust and finger prints.

Mostly you get more for your money now, specifically out of the drive train and battery, so that's all good. However, they have become a little cheap in other areas. They don't include a NEMA 14-50 plug with the charger anymore, which is what you need at home to charge at 7.8 kW (with the proper service and plug, obviously), or ~31 miles per hour. They also don't include the Homelink module for free, which will typically open your garage doors (or gates, if you live in that kind of neighborhood) when you get close to them, automatically. That's a $300 upgrade you have to buy after delivery, which includes the cost of a mobile service appointment. The cost of connectivity isn't baked into the car forever either. First year is free, but if you want the streaming audio (Slacker and TuneIn), streaming video (Netflix, YouTube, Hulu access), traffic and web access after that, it's ten bucks a month. Also, and this one is super weird... this car has a $2,000 upgrade available that boosts your 0-60 time from 4.8 to 4.2 seconds. Self-driving, if it ever becomes widely available, is still an extra $10k, which may be worth it if it's truly autonomous and you can start autonomously letting the car Uber people around.

The fit and finish of the car is vastly better than the 3 was three years ago. It doesn't look bad, but if I look critically at the "old" car, I can see varying gaps in the body panels, and the trunk sometimes doesn't stick closed. The only misaligned thing I can find on the Y is one side of the trunk joint, which is not quite flush with the rest of the body. The rest of it is tip-top, with no weird seals not set right or carpet not tucked in right or the other kinds of things you used to find on some cars. The back half of the frame is a single cast piece, down from 70 pieces in the 3, which likely contributes to the precision. The paint is perfect, though I had no problems on our 3, despite some widespread complaints.

I've only driven it 35 miles so far, but it's mostly what I expect it to be, which is to say it feels a lot like the 3, only "tighter" because of the AWD. I drove it home specifically for a couple of turns I know I could take hard in our Model S (which was also AWD), and you just point the wheels where you wanna go, and that's where it goes. Launches from red lights are as giggle-inducing as ever.

Our first go around with EV's was a 2014 Nissan Leaf, more or less its first generation, and we stretched that lease to 4 years. The Model S came in 2015, which was obnoxiously expensive, but the only choice for long-distance road tripping at the time. In 2018, we sold the S for the Model 3, starting our second generation of EV's. Later that year, Nissan stopped letting us renew the Leaf lease, so we swapped it for another Leaf, the better, second generation with range of about 170 miles. It was another perfect commuter car, and it did a good job of protecting Diana in the accident. This Model Y feels like our third generation, and in terms of capability against price, it definitely is. We've come a long way since that first Leaf. That the standard range Model 3 now starts at $38k is closer to being mass-market, but until you can buy a long-range EV for $20k, we're not quite there yet.

Haven't had to visit a gas station (rentals aside) since 2015, and that's amazing. With solar, some of our "gas" comes from the sky. My hope is that we can avoid buying anymore cars for at least five years, which will be interesting because that would be eight on the Model 3. Other than replacing tires and adding washer fluid, I don't see why we can't get there. 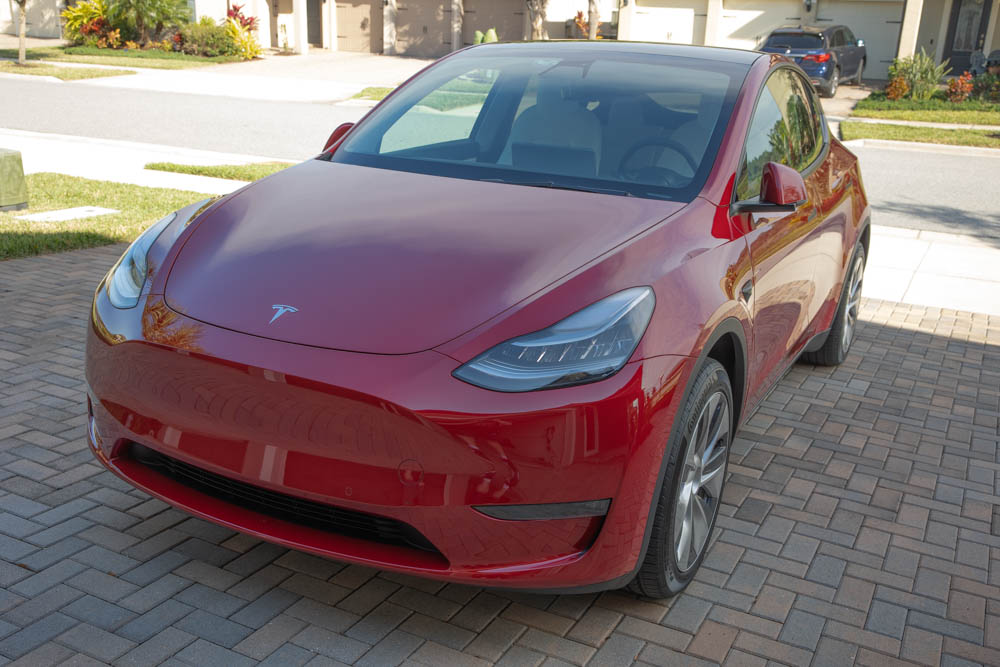