The accident "caught on tape"

The car accident that Diana suffered three weeks ago, as it turned out, was caught on the dash cam of the guy who helped her out of the car and made a statement to OCSO. The short story is that Diana did in fact have a green light, and the other driver turned in front of not just her, but another car as well. FHP apparently cited the other driver.

Obviously this is a relief to Diana, because like any driver, one tends to question if there was something they did to contribute to the accident, or could have done to avoid it. You can see from the video below that the other driver hit her rear quarter on the driver's side, causing the car to spin 180 degrees, then roll backward until it hit the median. (You can also see the driver in the left lane just drive away, which doesn't say a lot for humanity.) It's pretty obvious why the side curtain airbags deployed, that's for sure. The contact was pretty brutal. We watched it frame by frame, looking at the timing of it and making all kinds of observations about the time it took for the car to spin around (2/3 of a second), the time from the start of the other driver's turn to impact (1.2 seconds), etc. I think the unfortunate thing is that the driver in the left lane saw it coming, and by braking blocked Diana's sight line, so there was nothing that she could do to avoid it. Quarter-second variations in any of these factors could have led to drastically different outcomes. Had the driver been going faster or earlier, she might have T-boned Diana, probably sending her into the crosswalk sign, or worse, the signal pole or brick wall. A little sooner than that, and Diana or the left lane driver would have T-boned the other driver, which I imagine would have been worse for everyone.

The driver was young, just turned 18, so presumably still in high school. To that end, I can't fault her inexperience and hold no ill will because the only long-term problem we're aware of is the end of the car (injuries, I guess you never know). But in the moment, for the three hours we waited for FHP (which never did show), she made this strange comment about being "cool" about it and not a "hit and run" driver. Her mom, who came to the scene, was also kind of toxic toward her. At the time, I was just trying to get Simon to relax in the backseat of our other car, after I dragged him out of bed. But as I looked at the car, where it landed, and watched the traffic light sequence several times, I couldn't see any likely scenarios where Diana was at fault. The force to get the car to spin like that had to be non-trivial, so my assumption is that she came in pretty hot for some reason. I can't tell from the video if she was turning from a stop, but Diana had to be going at least 30 (speed limit is 40), getting back up to speed when the light turned green, for the car to roll several car lengths past the start of the median. The rear wheel took the brunt of the impact, and I think she's fortunate that the low center of gravity from the battery kept the car upright. This is why most EV's have solid crash ratings, because they have a low, heavy thing that makes up most of the floor.

So thank you, Nissan, for keeping my special lady safe. Cars may not survive this sort of thing, but they do a remarkably good job of protecting the people inside. 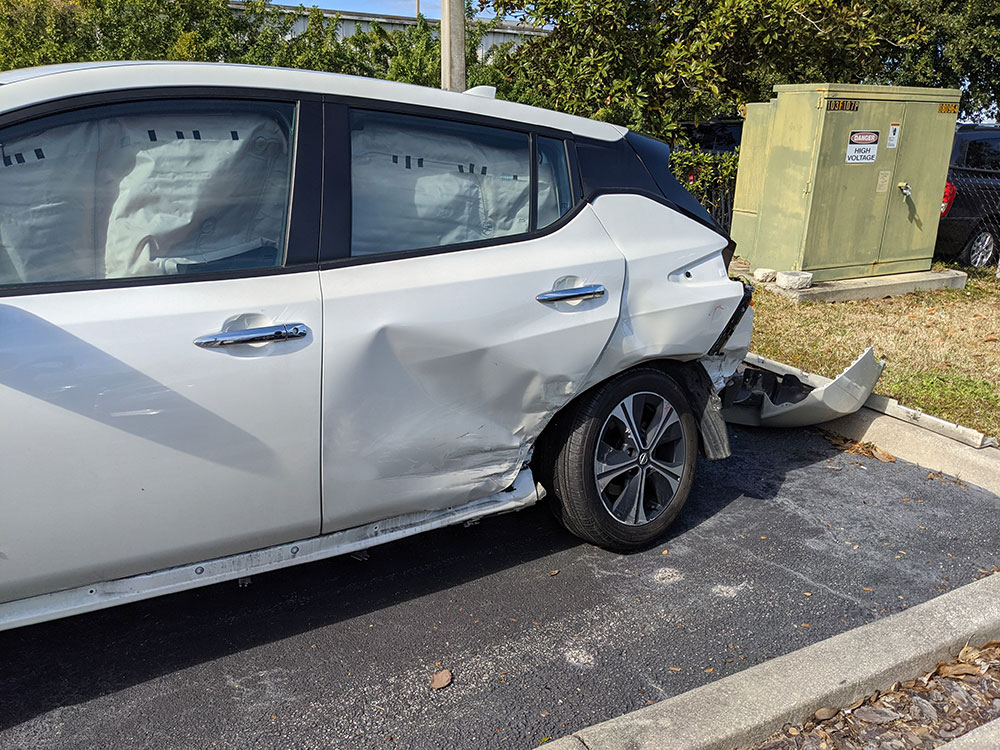