I finally defeated my air conditioner

For a few months now, I've been battling the upstairs air conditioner. It started because the dipshit landscapers buried my condensation drains in mulch. Not long after that, I finally bought a shop vac, because I wanted to suck all of the crap out of those two drains. The downstairs unit drained instantly, and I had a nice tank of minor sludge. But the upstairs unit I got nothing. The drain was still backing up and causing the float switch to shut off the unit. I could pop off the cap on the pipe and see the water there. As the air has been considerably humid, it was topping off a lot. I've tried a number of times to vac out the thing, but nothing came loose.

Mostly it has been happening at night, when the temperature was cool enough, but still not ideal. Today it was cutting off in the middle of the day, and I was frustrated. I went to Lowe's, and naively bought a snake thinking I could get it around the right-angle pipe, which of course I could not. When I added water on the assumption that it was dry, it didn't allow much, so I assumed the blockage was closer to the unit than it was outside. I was mentally preparing to cut the pipe as it angled into the floor, but decided I'd try a little drain cleaner. I had been resisting that, because the pipe was experiencing negative pressure, pulling suction through the pipe into the blower when it was on. I don't need that toxic shit's fumes blowing around the house. But I was at my wit's end. I decided at worst I could just leave the cap off and let it pull air from inside the house instead of from the pipe.

I poured at least 20 ounces into the thing, and it backed up. I tried to pull vacuum from the outside, still nothing. Indoor humidity was 62%, so I could see the downstairs drain evacuating a steady stream, not a drip. The upstairs should have been doing the same. Frustrated, I gave up for the day because the US Open final was on.

Not long before dinner, I noticed both blowers were running, because audibly it sounds different. I went up to look, and there was no backup at all. Weird. I wasn't optimistic, but I went outside to find a pile of sludge at the drain that looked like wet sawdust and smelled like vomit. The block was broken! I asked Diana to pour water through, and I could see it flowing outside, with chunks. I hooked up the vacuum and it stuttered and shook as more "material" came out.

I win. Suck it, air conditioner. 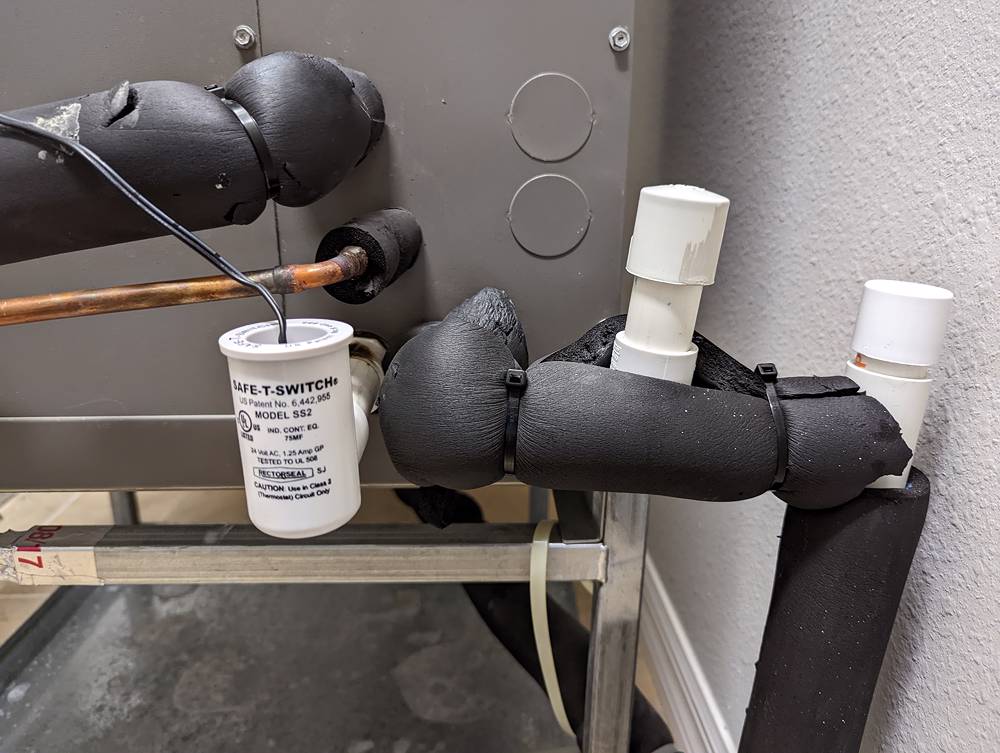