One year as a performing arts donor

We had our first annual donor appreciation event at the Dr. Phillips Center for the Performing Arts tonight. We actually jumped in about a year ago, which was kind of cool timing because it was waking up after Covid, and the new Steinmetz Hall had its grand opening early this year. It was neat to have a front seat to all of that.

While the event tonight was intended to celebrate the wider donor, partner and sponsor community, it was really dedicated to Jim Pugh, who spent about two decades trying to get the place built, serving as its chair long before there was ever a building. Pugh is a Central Florida native, born in Winter Haven, and he built an enormous real estate development business that seems to have left him very well off. But he used that entrepreneurial expertise to get not just a "good enough" arts center built, but arguably one of the best in the world. As Orlando has grown, and isn't slowing down, it was clear to him that they should build something that would be great and last for generations. Indeed, the three theaters are among the best of their class, and complimented by the school of the arts, event spaces and a new cabaret style venue that will open soon.

While the Walt Disney Theater is home to the touring Broadway shows and the spot we spend the most time, stunningly beautiful and well designed itself, it was the opening of Steinmetz Hall this year in the second phase that made you realize how ambitious the project really was. While they realized that they wouldn't be able to build the whole thing at once, figuring out how to get all of the big mechanical systems in the first phase, Steinmetz was going to be the place where any orchestra could feel at home. And it's still versatile enough to do everything from ballet to more typical amplified entertainment to banquets because of the floor that rotates in sections into whatever configuration they need, while the back slides on railroad tracks to open traditional fly space. It's just awesome. Hearing Carmina Burana performed there was borderline life changing.

So why donate to this cause? Everyone has different reasons to engage in philanthropy, whether it's giving money, stuff or time. My initial engagement started largely by accident, when the office I sometimes went to for work across the street (we were primarily remote) was invited to tour the incomplete first phase. I've always been a theater nerd to some degree, minoring in it for a year, lighting shows for my community theater in my home town, and seeing shows now and then. But this was something different, because it was remarkable how few compromises it appeared to have. Every venue I got to spend time in was, at best, suboptimal, like the theater at Ashland University, allegedly built as it is because it looked cool from the air. But this... in my limited knowledge seemed perfect. (I know now there are definitely some quirks.) And then seeing the schedule, I knew I wanted to see as much stuff as possible. Diana soon inquired about volunteering, and when they learned she had actual experience working in theaters, back and front of house, she was recruited and eventually promoted to a part-time house manager. So in some ways, DPC has been in our life for almost as long as we've lived here.

But for me at least, there was also a certain grounding that I felt came with this cause, being a part of the community where we live. Most non-profits I've ever donated to needed money for sustainment, or research, or special projects. This one needed capital to finish the building, and will always need money to fund outreach programs and endowments. You look at this $600 million building, and it's tempting to view it as a place for well-off people to buy Hamilton tickets. But then a bunch of kids get to see Hamilton for free, entire schools get to see orchestra performances, scholarships are given for the arts school, and the "arts for every life" thing becomes more than a tagline. There is something going on in that building at least five nights a week, most of the year.

Admittedly, I find the social interactions with donors a little uncomfortable, because I have little in common with most of those that I've met (relative to age and income), but I always enjoy talking with the staff, especially the production people (because I can nerd hard on the theater tech). It also gets me a little closer with the cool place that Diana works. Our donation only accounted for 0.0016% of the place getting built, so maybe 2 automated stage lights, or a short row of seats, or maybe the carpet in one of the back hallways. But promoting the arts is important when people connect so deeply with human performance. It often takes a backseat to professional sports. But if I have to choose between people crying watching Come From Away or because their local basketball franchise sucks, I think you know which one I would choose. I don't think I'll ever be a Jim Pugh, but I'm happy to contribute in whatever small way I can. A little pride in your community is a solid thing to put some energy into. 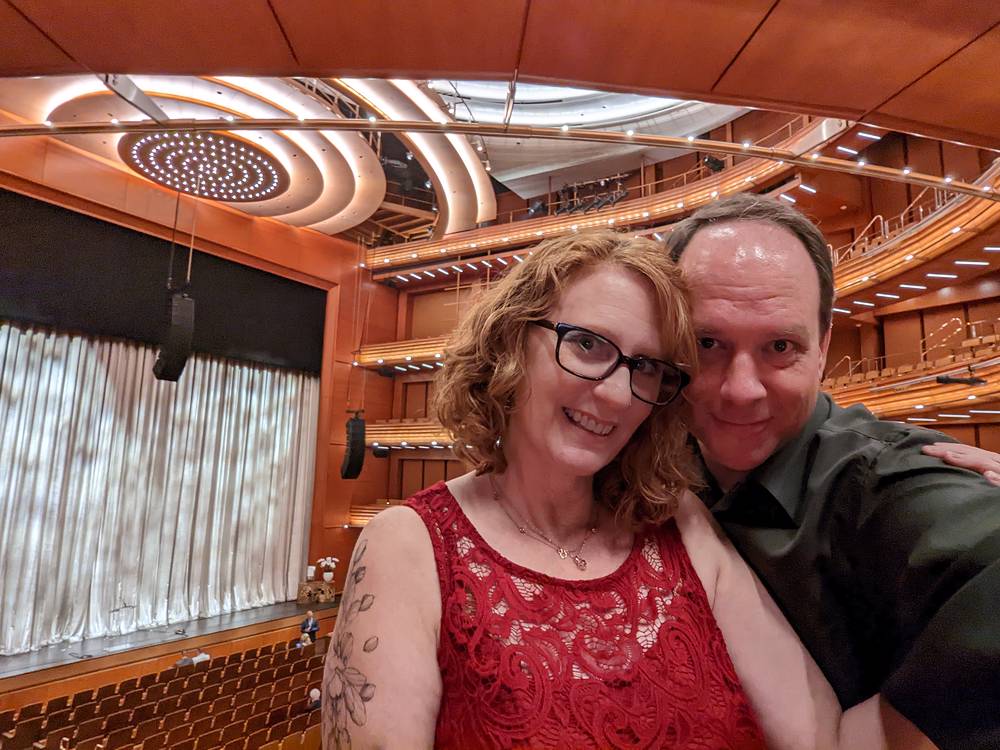