"Outdoor living is where it's at"

One of my favorite house flipping shows on HGTV was Desert Flippers, where Lindsey, the wife of the married couple flipping houses, said in the opener (with hand gestures) that, "Outdoor living is where it's at." I liked the show because the couple seemed like people I would want to hang out with, but they also made their properties in Palm Springs very outdoor friendly. As one does in a locale like that. This really translates to life in Florida.

It's a little different here because you need to screen in your outdoor living, because bugs, but since moving here I find myself sitting outside as much as humanly possible. I even do it in the height of swamp-ass season, when it's hot and humid. I like driving with the windows open, too. It's the most fundamental difference between living here and in Cleveland. Not that Ohio stopped me from grilling in December, but I don't have to push the grill out of the garage into the snow to do it.

There are a lot of different ways that you can measure quality of life. Being outdoors isn't for everyone, but I've never heard anyone say, "Oh no, I don't prefer fresh air." We spend a lot of time inside with air conditioning, mostly in July and August, but the rest of the time it's glorious to feel that sun on your face. My seasonal affective disorder was no joke until I moved to Seattle, which because of the variation of weather, even if much of it is that misty rain in the winter, I experienced relief. There's a reason that Walt built his theme parks here, obviously.

Last year we finally scored some decent patio furniture, and it fundamentally changed how we lived in our house. We were thinking also about building out our patio, extending it out another 15 feet or so, but eventually decided against it. The cost seemed a little high, and when I thought it through, it would likely prevent the sun from shining on the existing part, let alone into the living room. Even when it isn't sunny, it's wonderful to sit and enjoy one of those wrath-of-God thunderstorms we get in the summer.

This really calls into question where we might land once we're retired. I think it would be hard to go back to a world where this isn't the scene all year. There aren't many places that really qualify though, other than Florida, the southwest (which I don't like because it's not near water), SoCal and Hawaii. I would love nothing more than to get a nice little single-family house on the Atlantic coast, but I'm not sure we can make that happen without a lot of risk now on real estate.

So tonight I'm hanging out with two of the cats who are relieved to have the patio open. We had an unusual few weeks of cold-ish weather, as our uncharacteristically high electricity usage shows. It's a good feeling out here. 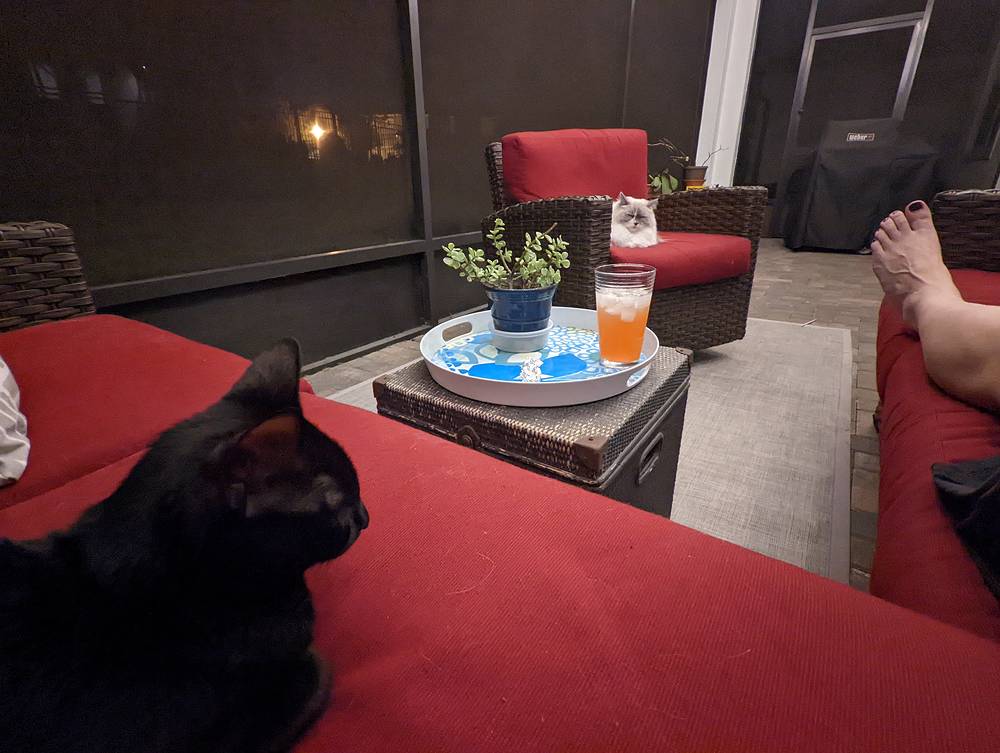