Pissed about gas prices? We had a solution years ago

It definitely feels like we've achieved a new level of crazy town and willful ignorance when the goofy reality denying crowd wants to blame gas prices on the president. Forget for a moment that basic sixth grade economics explains supply and demand, which is why prices are what they are. The more sinister issue is that these asshats have been opposed to the solution for years. It's a solution I already enjoy, by the way.

For reasons I don't understand beyond the influence of lobbyists, these same reality-challenged people have for years been opposed to the adoption of renewable and sustainable energy. The benefits seem pretty obvious, not the least of which is that we'll stop killing the planet, and you should be able to smell the money for all of the new jobs it could create. Reinventing the way we create and consume energy has a lot of opportunity with it, and it not only means jobs but also generally lower costs for consumers.

Maybe you've heard, but solar power has been around for decades. Now the lifetime cost per MWh is less than any fossil fuel. Ditto for wind and hydro. The critics suggest that the sun doesn't shine all day, and while I'm thankful that there's at least one truth that they accept, there's a solution for that too called batteries. Create a distributed generation model, on rooftops, over retention ponds and sub-regional utility scale plants, and you can create clean energy everywhere.

I bring up the subject of electrical generation because it is tied to the electrification of cars. While the economy of scale math means that EV's are "greener" even when the power comes from coal or oil generation (for real, I did the math), the truth is that electricity is a far less expensive way to move stuff around. A lot of people think of Tesla as the start of mainstreaming EV's, and that's mostly true if you overlook Nissan because of their lack of sales volume, but the truth is that GM pioneered the production of EV's way back in 1996 with the EV1. That program eventually ended officially because GM said it wasn't profitable, but the people leasing offered to buy them and GM refused, collecting them all and crushing them. There was a whole documentary about that car, but the short story is that demand and interest was potentially as high as 15% of the California market, leading to the theory that GM was either pressured by the oil industry or feared for its parts business, both of which were threatened by electric cars.

By 2013, when Tesla Model S started appearing on the roads in trivial quantities, it was clear that even at the crazy price there was a lot of interest. This makes sense, because Toyota's hybrid Prius went through the same cycle. Today a used Tesla is worth crazy money. Our 4-year-old Model 3 could fetch $45k right now, and we only paid $52k in the first place!

Where I'm going with this is that electric cars could have been a thing by now had lobbyists and politicians not been so against it two decades ago. The battery tech would have advanced faster, the cost would have come down, and we could be there. Shortsightedness is why we're not. Ford may have been guilty of participating in the delay as well, but they're going to laugh all the way to the bank when they can't make enough electric F-150's to meet demand.

Two-thirds of my electricity comes from my roof, and that includes the part that goes into our cars. Between the two of them, we've save $200 this month by not having to buy gas.

So thank your asshat politicians for being against renewable energy and fighting against EV rebates. Today it costs me about 3.5 cents per mile to drive somewhere, but if I was still driving a Prius, it would cost me 16 cents per mile. If I was driving a typical SUV, 32 cents a mile. And the year that I installed solar and bought that Model 3, I got all of my federal taxes back, and some carried over to the next year.

Tell me again the case against renewables and EV's. This mini-crisis about gas prices could have been avoided. And frankly, I'm going to be smug about it. 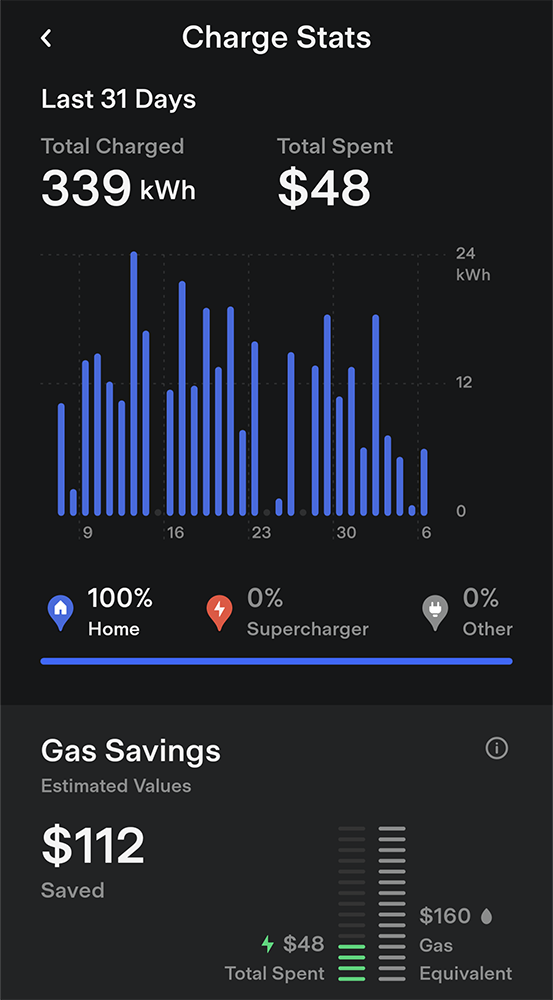