I wrote a review a little over three years ago when I bought an HP Spectre x360 laptop. I was compelled to do so because it was the first non-Apple computer I bought since they flipped to Intel CPU's back in 2006. Not quite two years ago, I built a Windows desktop as well. There's a lot of excitement about Apple's M1 CPU's, as well there should be, but native app support is mostly beta (looking at you, Adobe), and I don't have a lot of confidence that running Windows VM's (and in turn Linux containers) is where it would need to be. Pricing wise, the M1 MacBook Pros are in the same price point with similar RAM and storage, but you're still stuck with those useless touch bars and terrible keyboards.

What's the motivation to replace my three-year-old laptop? From a performance standpoint, it still is pretty solid. The biggest issue is that the battery life was getting pretty bad, often less than four hours with a developer load. If I'm being honest, I could have replaced that inexpensively, and maybe I still will. It also can get pretty hot when compiling or doing CPU intensive things, which is not ideal for lap use. There were other minor annoyances, like fan noise when it got hot, or a nagging touchpad driver issue where it wouldn't remember my preferred scroll direction. Overall, I did love the HP even with the quirks, and at $1,400, it was a really great value, especially compared to comparably equipped Macs at the time.

Let's be real though, the pandemic is receding and after the last year I want to rage spend on something. I feel guilt about electronic waste, but computers and cameras are the things that I create with, and I like nice tools. I didn't want to spend more than $2k, and wanted something that would again last at least three years. It really came down to three choices. The newer iteration of the HP was one, which still looks great and is well equipped. The next was Dell's XPS, which is a triumph in design. The last choice was the Surface Laptop 4. All have the most current, 11th generation i7 CPU's and 16 gigs of RAM, and were priced about the same. The HP and Dell at that price had the higher resolution screens, and in fact the Dell even used an OLED screen, though these both come at the expense of battery life. They also have Thunderbolt connections, which I used exactly zero times on my last HP, while the Surface Laptop did not. However, the Surface Laptop also had longer battery life with the conventional screen, which I realized is the same pixel density as my desktop monitors, where I see no pixels. It also had the Alcantara covering on the keyboard, which I totally love in "ice blue." Also, Microsoft's hardware driver support is perfect, and there's absolutely no bloatware to uninstall. On paper, the Microsoft product is not the best, but I love the way it feels and looks, so that's what I chose. The Dell might be better, but my weird texture feeling habits wanted the Alcantara. I ended up getting it from B&H which means I saved on sales tax and came in $300 under budget.

Microsoft has been doing a great job with packaging, which is to say it's attractive and doesn't get too ridiculous with plastic. The only other things in the box are a few small paper bits with the warranty, and the power supply. They're still hanging on to this magnetic Surface plug thing, which I've never been that crazy about because since it's round, you have to twirl it to sit right. The magnet will still hold it without it being connected. That's worse here because the bottom of the laptop is tapered inward, so the angle is awkward. But if you really hate it, the good news is that you can also charge through the USB-C port, but then you can't use it for peripherals.

Lifting it up, it's about 2.8 pounds, same as my HP. When you open it, that blue-ish Alcantara is just fantastic. It has an almost oily feel to it at first, but once you've handled it for a week or two, it feels more like proper fake suede. I definitely preferred HP's keyboard layout, and would argue it's the best, with dedicated home/end, page up/down buttons down the right side, and a dedicated insert button. If you're a software developer using a richly featured development app, you know there are countless keyboard shortcuts, some involving insert. The surface puts those buttons along the top, shared with the function keys, so it takes some adjustment in muscle memory to get them right. Insert is shared with delete, so you have to hold the fn key to use it. The keyboard is a little mushy in the middle, which I only notice if I'm really banging on it, but otherwise it's totally the right amount of key travel. It's almost as good as a Lenovo keyboard. The touchpad is enormous, has a satisfying real click, and being surrounded by Alcantara is surprisingly useful in just feeling around it.

The screen at full-brightness is an assault on your retinas in normal interior situations, but it's helpful if you're outside. I find that 50 or 60% is comfortable inside. There are no pixels to be seen. It's one of the best touch screens that I've seen on a laptop, as it doesn't flex much or feel cheap. Bezel haters might not like that there are bezels, especially compared to the XPS, but if you do touch it a lot, smaller bezels usually result in more false edge touches. The important thing here though is that they're not using the 16:9 aspect ratio, which is great for movie watching, but shitty for anything document driven, whether it's web browsing, word processing or writing code. I didn't realize what a drag that was on my last laptop until I landed on this one. The 3:2 is fantastic.

Boot time is fast, resuming from sleep is nearly instant, and the Windows Hello feature, where it reads my face, is so much faster than it was on my HP. Running software with the 11th-gen i7 and 16 gigs of RAM is easy, even with my typical developer load. That means Visual Studio, Chrome, SQL Server, various Docker containers running and other things. I've yet to feel it get truly hot, only slightly warm. The only time that I've heard the fans come on is when installing Visual Studio. This is a vast improvement over the old HP. Performance feels snappy, even with Visual Studio and Resharper. I'm surprised at how robust Photoshop feels, too.

It took awhile to get an accurate feel for battery life, and while it does vary, it's extremely predictable. The aforementioned developer load can pretty consistently get 8 hours if the screen brightness is in that mid-range. But even at full brightness, I was able to get 6 hours. For more typical web and document work, I expect around 12 hours. I haven't tried video work, but I wouldn't expect great battery performance on any computer.

Overall, I've really enjoyed using this computer. The design is solid, it's light and it performs extremely well. I'm confident this one will go at least three years as well. 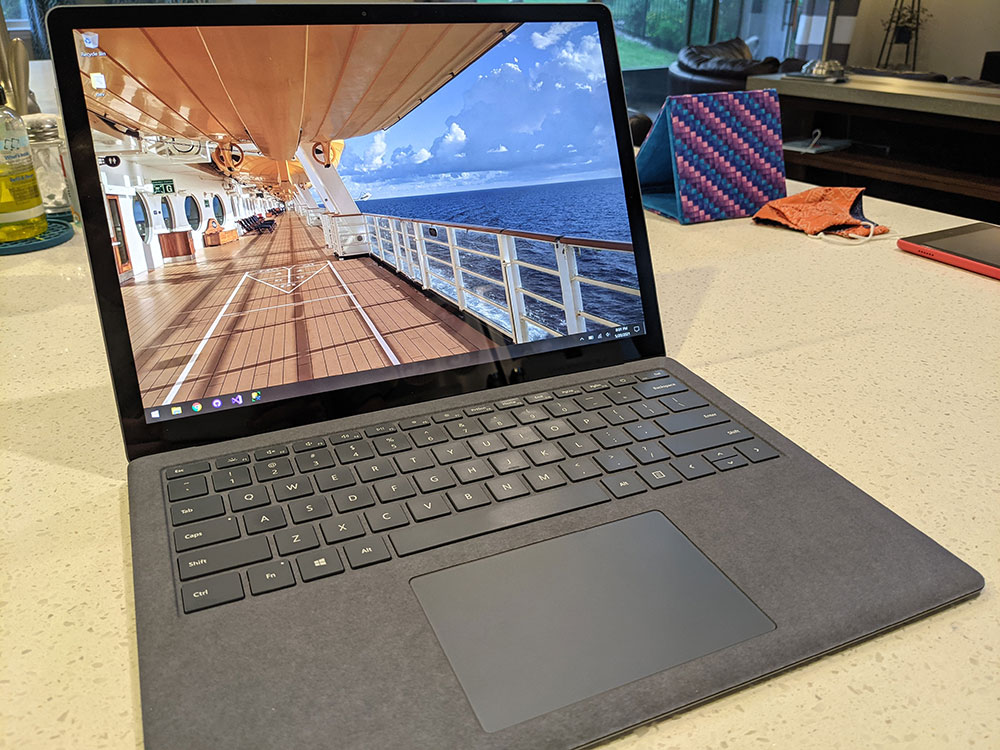