When I rambled on last week about my desire to jump into the world of lighting design, specifically with automated lighting, I wasn't entirely sure what I was getting into. It actually came back to me more subtly some months ago when Shirley Manson gave a shout-out to their lighting director. That seemed like a golden opportunity to ask a simple question about what the pros were using to design shows. She pointed me at the German company MA Lighting, which appears to be the gold standard for consoles and software. And I say "gold" because their hardware is crazy expensive. But looking into it has opened a whole new universe (that's a lighting joke you won't get) to me.

I'll get to MA in a moment, but back in the day, theatrical lights would have a bunch of analog dimmers that would dim lights hung around the theater. In college, these were tucked into the scene shop, and they produced a lot of heat and gave off a scarry hum (maybe it was the sawdust). Later, digital dimmers would fill a small rack. Eventually, we got to a point where there were no glass-and-filament lamps, and instead there were a bunch of LED's with dimming electronics right in the fixture. Moving head lights came about somewhere in the middle, invented primarily by Vari-Lite in the 80's, as best I can tell (which was partially owned by the band Genesis, believe it or not). All the while, there was a standard that emerged called DMX that let you control stuff with some kind of control console, or even computers. Or computerized consoles. That's pretty cool, because now countless manufacturers make stuff that can be controlled with any number of devices, and they can even be connected via standard XLR cables, like those used for microphones.

I've known about DMX for a long time, because I've encountered it in TV studio scenarios. Basically, you get 512 channels to control stuff, and a device can use a bunch of those channels depending on what it does. One channel, giving a range of 0 to 255, would be good enough to dim a light. If you need a bigger range, you can use two channels for more precise control, giving you a range of 0 to 65535 (8 versus 16 bits). That would be useful if you needed to be more precise with the tilting or panning of a moving light, for example. Those lights that I bought use a total of 14 channels, to dim, position the color wheel, the gobos, pan and tilt, focus, etc. I've learned that there are some that can use hundreds of channels because they do a ton of stuff. Groups of 512 channels are called a "universe" (see the joke now?), and so you can have multiple universes by having a bunch of those DMX groups going over regular IP networks and breaking out to the XLR cables where it makes sense. Yeah, you can see why a nerd like me finds all of that fascinating.

As much as I understood the technical underpinnings, control of it all was largely a mystery to me, because no obvious user interface came to mind that would make programming make sense. Looking at the free software out there, starting at the bottom, I found some pretty crappy stuff. Then I found some better options, where the software was free, but you had to buy their DMX interfaces. MA gives all of their software out for free to run on a computer, and it works the same as the things with hard buttons and faders that they sell.

My starting point was a cheap, $20, made-in-China dongle that plugs into a USB port on a computer and has an XLR connector on the other end. Frustratingly, only the worst free thing I could find would recognize that, but then I found that there's a way to use it with a discontinued version of MA called dot2. That version, which apparently came between 2 and 3, allows you to program against one DMX universe for free, and lacks many of the features of MA2. And that was totally fine, because I just wanted a starting point with which to learn, and that was perfect!

MA has an interesting business model. They give away the software to run on your computer, but they sell a flagship console that costs a staggering $80,000. At the other end of the spectrum, they have an "on PC" version, and you can buy a (relatively) inexpensive DMX interface for $1,500. They limit what you can do depending on the hardware that you buy, using a count of "parameters" as the governing unit. A parameter is some aspect of control for a fixture, so in my example about using two DMX channels to control panning, that counts as one parameter. The computer with the cheapest option then can do 2,048 parameters, and if you add one of their hardware options you can max it out to 4,096. But the $80k console starts at 12,288, and with more hardware can do up to 250,000, which is insane.

Here's what I can tell you from messing around with my two fixtures: Programming would definitely be easier with physical buttons and wheels (rotary encoders, as they call them), so I totally get where the value is for professionals. MA is not the only game in town, but again, it seems like it's the standard. There are some other free software solutions that I want to mess with, but even with the allegedly limited dot2, I see why MA is popular.

I'm also not sold that the paradigm that they've come up with is the "right" one. It uses concepts of fixtures, groups, presets and cues at its base, and a series of key sequences to manipulate them. Then you can apply effects on top of those, which are somewhat limited in dot2 compared to MA2 or 3. Ultimately it's just an abstraction over setting a bunch of values between 0 and 255, because that's how the fixtures work. And the hardest thing to get used to is that you can create a preset that describes fixture state, but not necessarily all of it. So you can set a preset to move something to point straight up, but that won't change the color of it unless you specify that as well. This is certainly by design, because you can then layer these things on top of each other, but it's not entirely intuitive. I tend to think of this motion and these changes in the way that Adobe After Effects works, where you set state of certain attributes on a timeline relative to each other. This isn't that.

My first mission is to create a series of cues that endlessly rotate after certain times, and put them out on Halloween. Hard to say if my two foggers will be enough, but we'll see. Basically my design idea is to have a steady, slowly moving and rotating set of beams, through a gobo and prism, interspersed with obnoxious moments of movement and color.

Beyond that, I'm willing to try the MA3 version and its built-in visualizer to design a show against a song. I can only see it in the visualizer, but that's OK. I just want to see if I can do it. I'm not sure what I do with all of this knowledge. I don't think I could turn pro, but I could be quite the hobbyist working with community groups or something. Maybe that's something I can even do at the arts center with their outside local groups. I dunno. Right now, I'm just having a lot of fun learning about it. 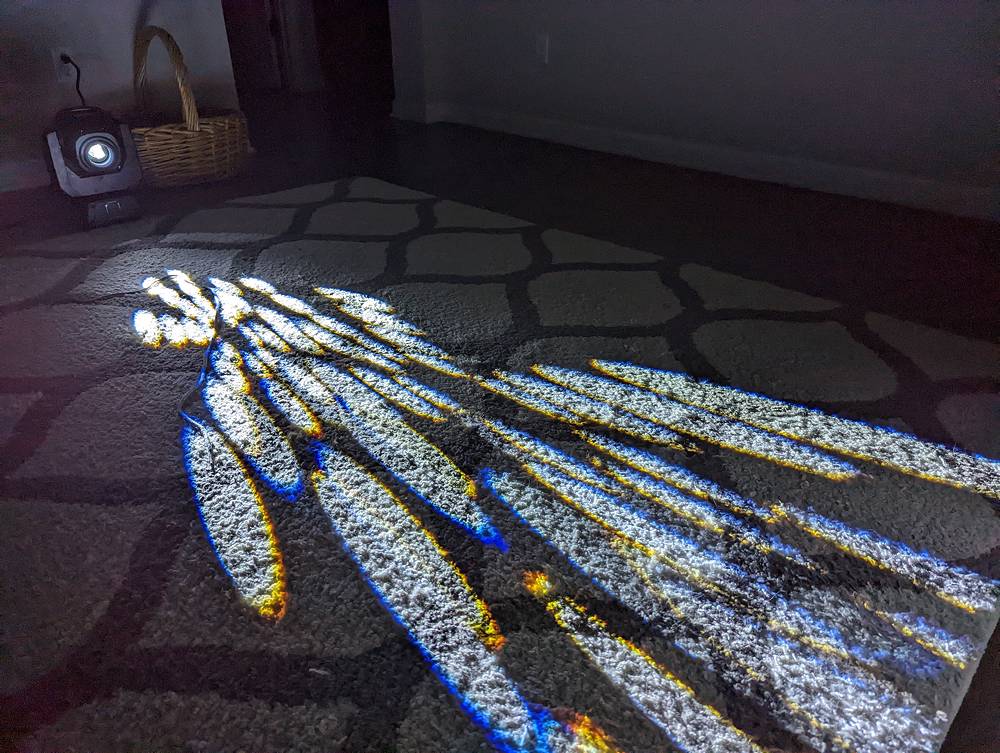