I didn't really get into the whole Wordle craze, because you only get one puzzle a day. In fact, most days I didn't think of it, and I've shared my result only once. As I said before, I mostly paid attention to it as a fantastic example of why we don't need apps for everything.

Still, I've been playing the same two time wasters, Solitaire and Wordament, for years. I can turn on music and just mindlessly tap away at those. I was all for a new one, so I downloaded one of the many Wordle clones available, settling on one called Worde in the Google Play Store. My ADHD hyperfocus kicked in and I figured out pretty quickly the optimal way to play it.

First I found someone who did a statistical analysis of the word library, which if you didn't know, you can see plainly in the source code for Wordle. That analysis calculated the frequency of letters as well as placement to determine the optimal first word. I understand statistics well enough to separate real things from nonsense (useful in the last two years), but that's as far as it goes. The analysis put AROSE as the best first word. This isn't far from AISLE, which was instinctively the first word I was using. It seems strange to have A as a first letter, but even if it isn't the first letter, it does appear more than the other vowels among five-letter words.

From there, I largely went on instinct in looking for the best way to use the rest of the letters as efficiently as possible. What I learned was that you could use almost everything over the next three words, THING, PLUMB and WACKY. You rarely need all of them, and they are interchangeable based on what you see after AROSE. Some of it is just testing letter grouping, like TH, PL, CK, as well as TR, ST, LT and vowel combinations.

I suppose the idea is to get the word in as few tries as possible, and even with this path, I think my average is somewhere between 3 and 4, but closer to 3. The Worde app doesn't have those stats like the official game, so that's a guess. After 200 games my win percentage was 96%, but those I lost were early on when I got trapped into having too many choices. That's where you have something like STA*E, and you can put an R, T, G, K, L or V in that spot. I learned after getting burned a few times to just use a guess to test as many letters as possible with a word that isn't the solution, like GRAIL.

This doesn't mean that it's easy, because sometimes I get all the letters and the word still isn't obvious to me. Pattern recognition is a weird thing because what's obvious to one person isn't to another. So for that reason, it's a solid time waster, and it feels good to succeed at something. 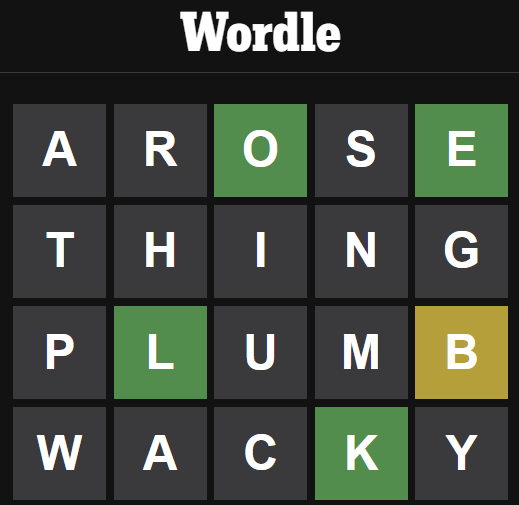