Another sick cat, and growing kittens 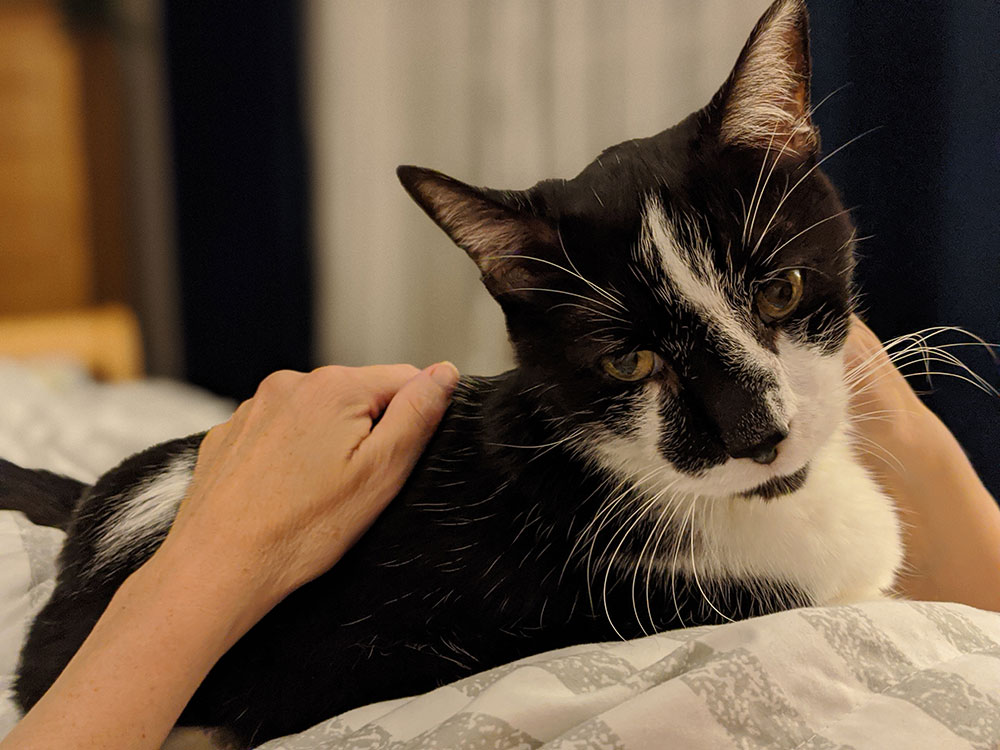 Even before we lost Emma, we got on the list for the kittens, in part because Oliver has lacked a serious playmate since Gideon died. We developed this grand plan, hoping to heal the pride a bit. Now, Oliver is sick.

When the kittens came home, he was kind of salty toward the kittens, even though they desperately wanted him to be a cuddle buddy. I thought he was just being difficult, but we noticed that he wasn't eating particularly well. At first we thought it was just the different mix of things since Emma, who was on special food, and the the kittens were eating what the breeder had been giving them. But it turns out he wasn't eating anything we gave him, so it wasn't an issue of him being picky. Then he had diarrhea for a few days, and was barfing up his thyroid meds along with everything else. He lost a lot of pounds, really fast.

The vet did blood work which was mostly normal, and my former girlfriend vet believes it's likely IBD or small cell lymphoma, common for his age. Getting a definitive diagnosis for that would involve some pretty expensive tests. If it's the lymphoma, his long-term prognosis is probably not great, while the IBD is treatable with steroids. The 'roids may help initially in either case. Right now we're trying to ascertain how he's feeling right now, because he's so lethargic. He's drinking pretty well today, and ate a little without barfing the last two days.

If I've learned anything after seeing four cats go in my adult life, it's that you kind of "know" where they're at and when to keep trying and when to do the humane thing for them. Oliver is not quite 14, but already older than Gideon was. Diana and I don't feel optimistic, because he's changed so much, so quickly. We'll get him back to the vet and see if there's a workable drug treatment assuming the IBD first. As quickly as he's deteriorated, I suspect he'll let us know pretty quickly if the drugs work. It's hard, because unlike Emma, who obviously expended all nine of her lives, Oliver is supposed to be the father figure for the kittens for a few more years. Maybe we're just being naive.

Meanwhile, Finn and Poe are visibly larger after just two and a half weeks. Even more odd, Finn is a little bigger already. Ragdolls are a big breed, which is why we wanted them, but I'd like them to be little at least for a little while! The little fatties can put away a half-can of food in no time, and want more. They are crazy high energy, and maintain it for long parts of the day. They also exhibit many of the stereotypical behaviors for the breed. They follow you around like a dog and make eye contact with you.

These kittens were perfectly timed. Just two weeks in, and they've given us a lot of love and joy in a short time. They're both charming and have their own personalities. Finn is a troublemaker and early morning cuddler, while Poe secretly instigates the wildest play time and is the more dog-like of the two.

Weird times in the Puzzoni pride. Oliver is getting lots of extra love.