I'm a big fan of the biggest Lego sets. The Disney Castle and Technic Bucket Wheel Excavator were amazing, and then a few years later they put out the collector's version of the Millennium Falcon, which still holds the record as largest. The roller coaster is really cool, too. These are "toys" because they're made of Lego, but certainly not the kind of toys you buy for your kid because they're expensive. And so I buy them for me, because they're an incredibly therapeutic experience for me. It's an activity where I work with my hands, and with the help of a good playlist and a cocktail, let me escape a little. I've built four bigger sets in the last three months, if that tells you anything.

I was really excited about the release of the Rough Terrain Crane, the biggest Technic set to date, and I pulled the trigger on that a few weeks ago. I only have one other Technic set, the aforementioned excavator. They're a very different experience from building typical Lego sets, because they're assembled largely as a set of beams joined by pins, instead of interlocking bricks. The most exciting ones have motors and a ton of mechanical innards connected by rods and gears. The coolest part is that all of that movement is driven by one motor, with lots of switches and gears to engage different movement.

The crane motor drives the winding of the rope, the extension of the boom, the angle of the boom, the rotation of the boom and the lowering/raising of the stabilizer feet. Geared, but not by the motor, is a steering linkage that can be turned from a wheel on the back (four-wheel steering), and the wheels themselves are connected so that they all go in the same direction, but also have differentials so they can turn at different rates when you move it and steer. As someone who appreciates how that works in a car, it's really neat to be able to move the wheels by hand and watch the gear movement. It's one of the coolest simple machines in the toolbox.

Building it is really satisfying. You start with the core of the vehicle, which eventually takes input for the boom rotation and stabilization feet, but also the steering linkage and wheel gearing. I made a mistake in this part, with one of the differentials going in backward. That means that, yeah, the front and rear wheels couldn't roll in the same direction. It wasn't a huge problem to correct, I just had to look at where the front third attached to the core, separate it and fix. I lost an hour, but learned a lot. The gear box behind the boom is oddly a lot simpler, despite having a sliding three-way switch. The boom extension is mechanically elegant.

My 10-year-old loves the finished product. There are so many things to move around, and he enjoys that part of it. He really notices the details, like the door on the cab, the storage cubbies for tools and chains, etc.

I imagine that I'll have this one together for a bit, because disassembling to the 13 component bags will be a little time consuming. The Technic sets typically don't have clean and obvious lines between building phases. But as I've said before, you don't spend a lot of coin on something that you're only going to build once. 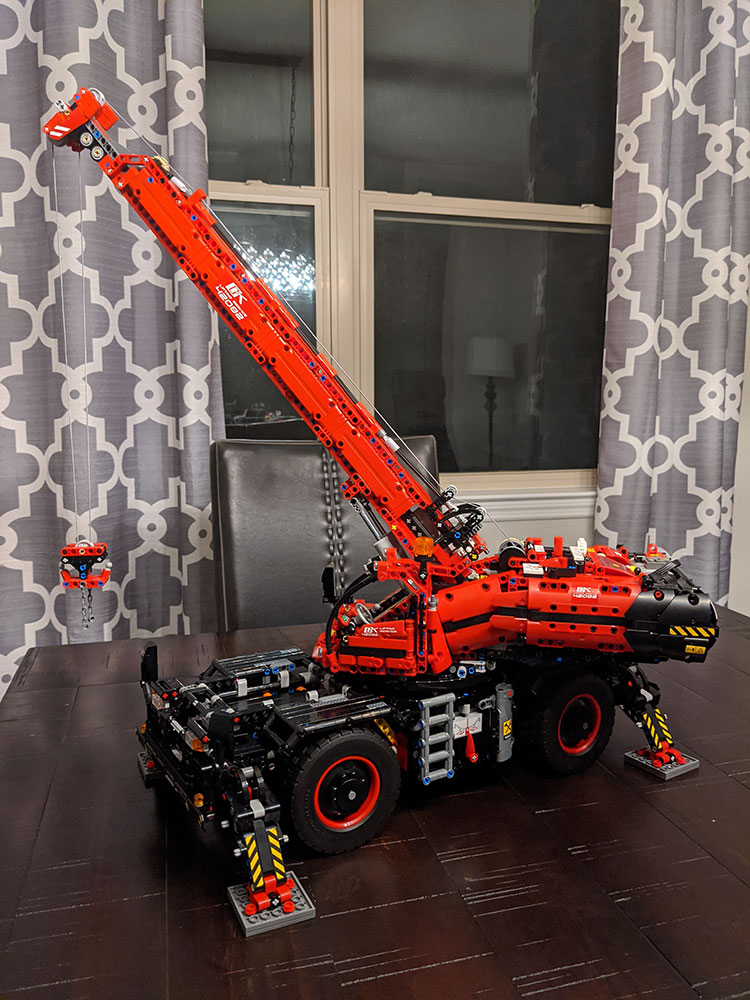