Today we said goodbye to Oliver, the last of the blended pride. When Diana moved in at the end of 2007, I had Cosmo, who was old and grumpy even then, and she had Emma, Gideon and Oliver, the youngest. Oliver was still a kitten then, about a year old. He never really matured, despite being really overweight at one point. He was kind of dumb, in fact, in a charming way. Never graceful, never really learned how to retract his claws when he was stuck to things, and mostly just wanted to be loved.

When Diana first moved in, Oliver wanted Cosmo's approval in the worst way, and he never stopped looking for it, right up to the day she died, five years later. He would seek the same attention from Emma, who was mostly as indifferent. In recent years, he would bow his head to her, she would lick him a few times, and then hiss at him. His real buddy was Gideon. Even though "Basement Cat" was generally larger, Oliver had no problem wrestling with him every chance he could get. They never really cuddled, except in the cross-country drives between Cleveland and Seattle. While he couldn't always get the close contact to cats, he had no problem getting it from his humans. He took an early interest in Simon, until Simon became mobile and had grabby hands, at least. He would routinely sit next to us, especially in the evenings. He was pretty reliably sleeping in one of our beds up to the end as well.

Oliver definitely missed Gideon, and my hope was that he would have a few years with the new kittens. They have been relentless in seeking his approval, especially Poe. Oliver assumed the role of grumpy old man, really up until the last month or so, when he started to tolerate Poe sleeping next to/partially on him.

I'll admit that Gideon was my favorite among Diana's cats, but Oliver was a reliable buddy. I liked to project the Up "Doug voice" on him because it seemed to suit him. He's been a family fixture for 13 years, since the day we decided to be a family. He loved being out in the patio, which is where I got to spend a little time napping with him yesterday.

Oliver had thyroid problems, and likely thyroid cancer, and maybe even lymphoma. There are all kinds of tests you could do to figure this out, but the endgame is pretty much the same. He hasn't been able to substantially eat and has been losing weight for four months. As fat as he used to be, it was sad to see him so skinny. It's tough to see him go so soon after Emma. 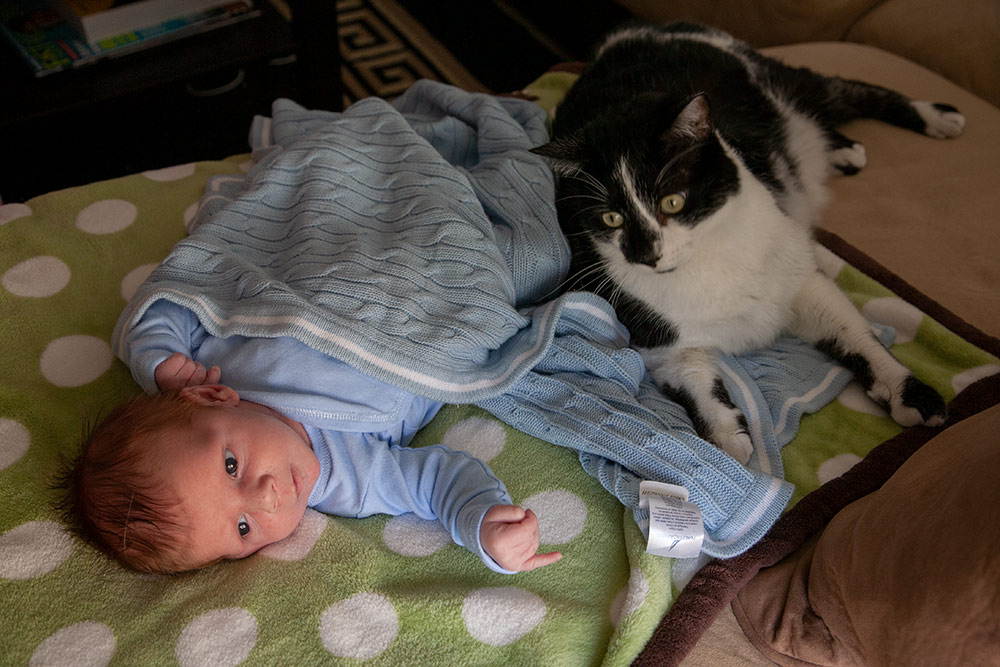 Oliver with baby Simon in March, 2010